Showing posts from April, 2012
Show all

Marian Cutter and The Children's Book Shop in New York 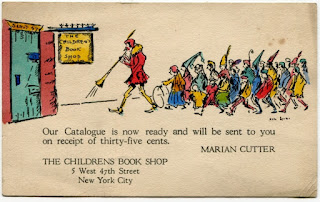 The Children's Book Shop in New York has a new catalogue and proprietor Marian Cutter is letting her customers know it's available for thirty-five cents.   The postmark on the address side of the card indicates the date is November 12, 1921, so the holiday season is nigh and this catalogue will no doubt provide some timely mail order shopping.  The color illustration on the card is a nice touch, perhaps even a bit unusual for such a postal piece. A pied piper figure leads children into Marian Cutter's shop at 5 West 47th with the following notice printed beneath the image:  Our Catalogue is now ready and will be sent to you on receipt of thirty-five cents . Ms. Cutter had just opened her shop two years before, in 1919, nearly two years to the day. It was a pioneering effort, the first book shop in New York City to specialize in children's literature. Boston and Chicago already had children's book shops and now New York would, too. And soon other major
2 comments
Read more
More posts