Showing posts from September, 2011
Show all 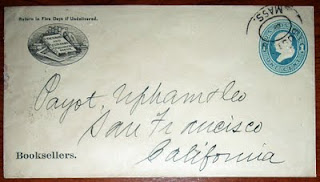 This was a tough one to title because of the two companies indicated on the 1887 postal cover: Ticknor and Company of Boston, Publishers , and Payot, Upham & Co. of San Francisco, Booksellers . Each was important to the book trades on their respective coasts, each was important to the other, and each could have been featured in a separate post. I've written previously about Ticknor and its various business incarnations through the 19th century and beyond, so more attention will be given here to Payot, Upham & Company. However, for anyone interested in Ticknor history, here's a similar cover I wrote about last year, in which some company history is outlined. The covers are quite similar with minor  differences in the Ticknor logos. Until 1870, the San Francisco bookselling firm, Henry Payot & Co. dealt primarily in foreign language books from European countries, particularly France. That is undoubtedly owed to the fact that founder Henry Payot was born to F
Post a Comment
Read more

A letter from Tiffany Thayer of the Fortean Society

Charles Hoy Fort was a writer who, after several failed novels, finally found his audience with a nonfiction book titled The Book of the Damned (Horace Liveright, 1919), which is regarded as the first book to deal with the field of anomalistics , or paranormal phenomena. Fort and his writing attracted some very influential literary pals, such as Theodore Dreiser, an old friend who was instrumental in getting Fort's work published. Many others admired his writing and became founding members in a society dedicated to Fort and his works--the appropriately named Fortean Society. Writer Tiffany Thayer started the society. Dreiser served as the first president and they were joined in membership by notable literary figures such as Ben Hecht, Alexander Woolcott, Booth Tarkington, Dorothy Parker, Oliver Wendell Holmes, and H. L. Mencken. Ironically, Fort shunned the notion of such a society and refused to participate beyond the first meeting, in which he was lured to under false prete
2 comments
Read more
More posts