A letter from Tiffany Thayer of the Fortean Society

Charles Hoy Fort was a writer who, after several failed novels, finally found his audience with a nonfiction book titled The Book of the Damned (Horace Liveright, 1919), which is regarded as the first book to deal with the field of anomalistics, or paranormal phenomena.

Fort and his writing attracted some very influential literary pals, such as Theodore Dreiser, an old friend who was instrumental in getting Fort's work published. Many others admired his writing and became founding members in a society dedicated to Fort and his works--the appropriately named Fortean Society. Writer Tiffany Thayer started the society. Dreiser served as the first president and they were joined in membership by notable literary figures such as Ben Hecht, Alexander Woolcott, Booth Tarkington, Dorothy Parker, Oliver Wendell Holmes, and H. L. Mencken. Ironically, Fort shunned the notion of such a society and refused to participate beyond the first meeting, in which he was lured to under false pretenses. The Fortean Society continues to this day as The International Fortean Organization (INFO).

That bit of information sets the stage for another installment from Schulte's Book Store letter archive in my collection. This one is from Tiffany Thayer, who actually founded the Fortean Society to celebrate the publication of Fort's popular Lo! (Claude Kendall, 1931), which Thayer had helped get published. Doug Skinner wrote of this and much more on Thayer in an excellent article for the Fortean Times (June 2005). 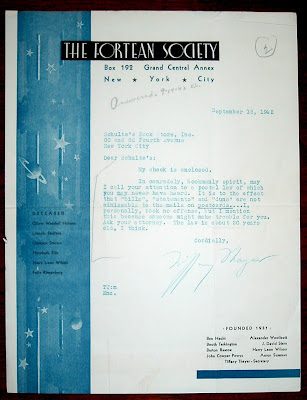 Tiffany Thayer bought books from Schulte's Book Store in New York City and felt compelled on one occasion to add a note with his next order, after having received a parcel and noticing a potential problem for the bookseller's mailing  practices:


In comradely, bookmanly spirit, may I call your attention to a postal law of which you may never have heard. It is to the effect that "bills", "statements" and "duns" are not admissable to the mails on postcards....I, personally took no offense, but I mention this because someone might make trouble for you. Ask your attorney. The law is about 20 years old, I think.

The Fortean Society letterhead that Thayer used provides some nice history for the organization. The left column offers a list of members who have passed on to "the next world," against an artistic backdrop of stars and planets. The list of deceased members is an impressive one: Oliver Wendell Holmes, Linclon Steffens, Clarence Darrow, Havelock Ellis, Harry Leon Wilson, and Felix Riesenberg.

In the lower-right corner of the letter is the founding date (1931) for the society and a list of names that I assume was the founding board, including Tiffany Thayer as Secretary. Again, an impressive list of names from the literati of the day: Ben Hecht, Booth Tarkington, Burton Rascoe, John Cowper Powys, Alexander Woollcott, J. David Stern, Harry Leon Wilson, Aaron Sussman. What is interesting is the absence of a key founder--Theodore Dreiser, the society's first president no less. 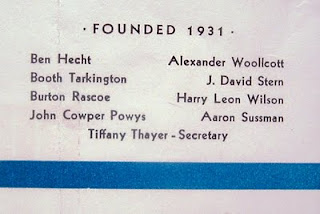 The Wikipedia page for the Fortean Society indicates that Tiffany Thayer became very controlling of the society's direction as well as its newsletter, which he used for his own views. As he drifted from the the original intent of the society, perhaps he and Dreiser got crossways with each other. Thayer reportedly kicked out an entire chapter (San Francisco) from society membership over a disagreement.

I did learn from Doug Skinner's article, referenced above, that founding member Alexander Woollcott, who had social ties with President Roosevelt, may have quit the society that year because of a Fortean Society newsletter article penned by Thayer, February 1942, that accused the president of colluding with Japan. But Woollcott's name was still on the letterhead featured in this post, by September 1942.

Perhaps Dreiser's split from the group, if he did indeed leave, was not as amicable a departure as that of Woollcott's. Dreiser did have a beef with Thayer, however minor, about some of Charles Fort's notes, as indicated in the archives at The University of Virginia. In A Guide to the Papers of the Fortean Society, 1927-1952, a letter from Dreiser to Arthur Leonard Ross (A.L.R.) indicates trouble between Dreiser and Thayer, as noted in the collection guide:


Theodore Dreiser to A. L. R. 1937 Jun 26 TLS. 1 p. Will not take action against Tiffany Thayer, former secretary of the Fortean Society. Says that Thayer has some notes of C. F.'s that should be in a publicly accessible collection, e. g. the New York Public Library. Mentions Ben Hecht and [David] Stern (owner of the N. Y. Post.) Dreiser mentions that he was denied access to the notes.

There are other letters in the collection that point to trouble between Thayer and society members, as well as Charles Fort's widow, who sued Thayer for her late husband's notes.


Alexander Woollcott to A. L. R. 1937 Jul 4 TLS. 1 p. Lent his name to the Fortean Society, thought its purpose was to call attention to Fort's book. Mentions that Mrs. Fort is suing Tiffany Thayer for the return of Charles Fort's notes.

Back to the letter that's the subject of this post, Thayer seemed to have a good relationship with his bookseller, Schulte, and didn't want to see him in trouble over misuse of the US Postal System. And so, in "comradely, bookmanly spirit," he let Schulte know about the errors of his ways in using postcards inappropriately. 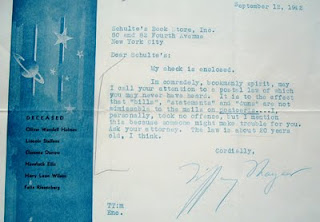 I, for one, am grateful that Thayer was thoughtful enough to enlighten Schulte and that Schulte kept his correspondence and that other collectors and dealers down through the years have preserved this letter because I now get to enjoy it in my collection and learn about a society, its literary members and beginning, and its namesake who wanted nothing to do with it.