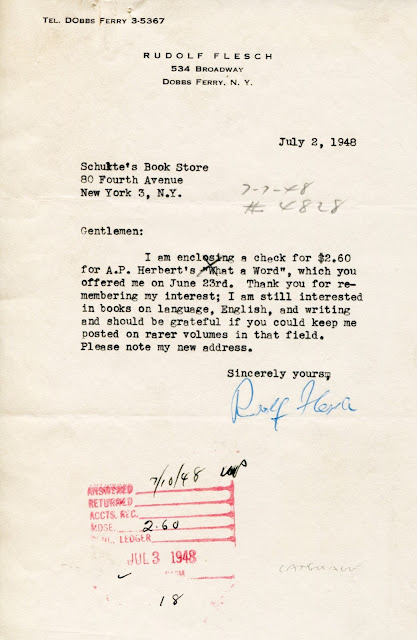 A Rudolf Flesch letter to a bookseller  (high readability score!) Rudolf Flesch (1911-1986), a writer, readability expert, and proponent of the Plain English Movement, collected books on language, English, and writing. So it comes as no surprise that a letter he wrote to a New York bookseller in 1948 included an order for a book on language and a request for more books on the subject, particularly rare books. Flesch, an Austrian immigrant who fled to America ahead of Hitler's invasion in the 1930s, had earned a law degree in Vienna, but in his new country, his scholarly pursuits turned to Library Science (Ph.D. from Columbia University), reading, and writing about the English language. In 1955, he wrote the classic,  Why Johnny Can't Read and What You Can Do About it , which advocated phonics for teaching students how to read. The book was a best-seller. Parents loved it, educators not so much. Today, more than 60 years later, cognitive neuroscientists still advoca
Post a Comment
Read more
More posts