Showing posts from June, 2009
Show all

Justin W. Brierly Bookplate
On the Road to Kerouac 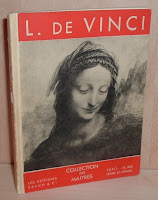 We’re in the midst of a record-setting heat wave here in Southeast Texas. Yesterday afternoon, in the shade of my back porch, the mercury stretched all the way to 102 on the Fahrenheit scale. In the shade! The humidity doesn’t help matters, either. Anyway, for some reason I decided to leave my cool, comfortable office and get out on the road to do a little book hunting. I’m glad I did. I found a fair number of decent books for my two-hour effort, even if I had to leave my truck baking in the sun for awhile. But it wasn’t any particular title I found that initiated this post—it was what I found inside one of those books: A bookplate for one Justin W. Brierly of Denver, Colorado. Name doesn't ring a bell? Didn't for me either, but I liked the look of the bookplate, which sports the family crest, name and the year 1615. So I bought the book for four bits (cheap French paperback art book from the 1930s) and took it home to research Brierly and see if he was anyone of import
4 comments
Read more 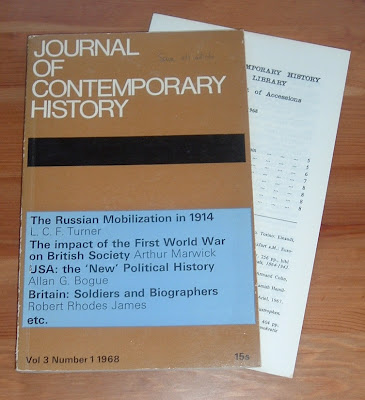 Looking through an old Journal of Contemporary History (Vol. 3, Number 1, 1968) yesterday, I found a library list of newly acquired books. This little list had a big title: The Institute of Contemporary History and Wiener Library Quarterly Select List of Accessions, Winter 1967/1968 . But then, the Wiener Library is no ordinary library. The Wiener Library, in London, is the world's oldest Holocaust memorial institution. The recent assault at the United States Holocaust Memorial Museum in Washington D.C. makes this discovery for my collection all the more timely, topical, and poignant. This pamphlet of eight pages (two 8.5" X 10.5" sheets folded and stapled) is the first library accession list I've run across. I don't know how prevalent they are, but I would think the journal had a lot to do with this list getting out to the public. Within the eight pages are an impressively diverse range of topics for such a short list. Most of the categories deal with Eur
Post a Comment
Read more

A book's jacket, D-Day, and the home front

Yesterday, as the D-Day anniversary approached, I saw a news report about an American vet who had landed at Normandy in the D-Day invasion during World War II 65 years ago . This vet spoke about what the Allies had accomplished and gave a lot of credit to the home front. Without the efforts on the home front--those individuals working back home for the war effort in factories, communities, and individual homes--they would not have been successful, he said. Fifteen years ago, during the 50th anniversary of D-Day, my wife and I toured Normandy, went to Omaha Beach where the American forces landed, and viewed and reflected on all the white crosses at the cemetery. My first thoughts there were about the thousands of soldiers who died that day, represented by all those crosses. How, or what, could I think otherwise? And I thought about those who survived the German defensive and secured the beachhead. As we visited various battle sites in Normandy, such as Sainte-Mere Eglise , met and t
1 comment
Read more
More posts