A book's jacket, D-Day, and the home front

June 06, 2009
Yesterday, as the D-Day anniversary approached, I saw a news report about an American vet who had landed at Normandy in the D-Day invasion during World War II 65 years ago. This vet spoke about what the Allies had accomplished and gave a lot of credit to the home front. Without the efforts on the home front--those individuals working back home for the war effort in factories, communities, and individual homes--they would not have been successful, he said.

Fifteen years ago, during the 50th anniversary of D-Day, my wife and I toured Normandy, went to Omaha Beach where the American forces landed, and viewed and reflected on all the white crosses at the cemetery. My first thoughts there were about the thousands of soldiers who died that day, represented by all those crosses. How, or what, could I think otherwise? And I thought about those who survived the German defensive and secured the beachhead.

As we visited various battle sites in Normandy, such as Sainte-Mere Eglise, met and talked with D-Day vets, I don't remember thinking of the home front and their role in the war. I doubt most people in that setting would. But the old soldier in the television interview yesterday put it in focus for me. And so did a book jacket from a book published during war time.

Yesterday, after seeing the interview, I went to work cataloging books and I came across a box of books I had set aside months ago to deal with later. One of the books I fished out was Ann Rutherford and the Key to Nightmare Hall, by Kathryn Heisenfelt (Whitman Publishing Company, Racine, Wisconsin, 1942). As I thumbed through the book, I couldn't remember why I had set it aside for later. It appeared to have no redeeming characteristics for either resale or my personal collection. 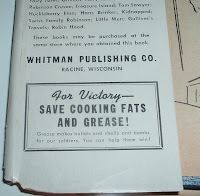 I was about to place it in the "donate" pile until I noticed the blurbs on the jacket flaps. At the bottom of the front flap, these words caught my attention:

For Victory--SAVE COOKING FATS AND GREASE! Grease makes bullets and shells and bombs for our soldiers. You can help them win!

It feels a bit eerie that I would choose that day to resume work on that box of books and find the related World War II reference. Whether Freudian forces of subconscious theory were in play or some other-worldly ordination in effect, I merely took it as a happy coincidence--one I should blog about, as it related to my ephemera collection.

Whitman published a series of juvenile books during the war that promoted patriotism, The Fighters for Freedom Series, which featured heroic men and women. For those and other books in other series, such as the one that featured Ann Rutherford, they used their jackets to promote patriotic behavior. This kind of contribution, no matter how small, was part of a big-picture network heavily promoted by government offices such as the Department of War Information, created by President Roosevelt in 1942 to mobilize support at home for the war.

Lauren Roberts, over at BiblioBuffet, has written an excellent article on the subject, which I discovered while searching the Web for information about the home front contributions to the war effort, as seen through the lens of the print media and related ephemera. No need to reinvent the wheel here, and I doubt I could do as fine a job, so click here to read Lauren's informative and interesting piece. She explains why there was a need for such a massive home front campaign and offers some fine examples of ephemera representative of the era. Pertinent to my book jacket's request for cooking fats and grease, she even refers to a booklet, A Guide to Wartime Cooking by H. J. Heinz, that states "two pounds of waste fat will make enough glycerin for five anti-tank shells." That answered my question about how cooking fats helped make bombs. 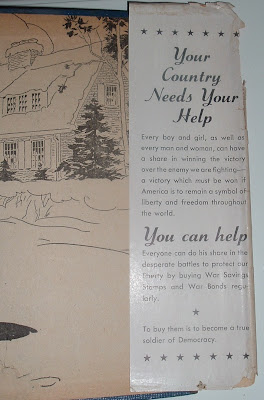 The rear flap of the book promoted another way to help the Allies win the war: Buy War Savings Stamps and War Bonds. And buy them regularly. To do so, the ad proclaims, is to "become a true soldier of democracy."

For this blog, I have never referred to a book's jacket or dust cover as ephemera, or bibliophemera. By definition, ephemera, as related to paper, refers to those items that are not meant to last beyond their intended use, such as ticket stubs, receipts, brochures, or ads. Things we keep a short while and then throw away or destroy.

Book jackets are intended to be kept and to protect the book's covers from dust and soiling. So I've stretched the definition here to include this jacket. But it does appear to be nearing the end of its intended use, as tattered as it is.

And now an unintended use has surfaced--that of a history lesson some 67 years later on the government's use of media, and the media's role, in rallying the "troops" back home to create a national mood favorable to patriotic participation in the war effort. From the propaganda machine, if you will, to the war machine, from the soldier on Omaha Beach in France to the housewife back home saving a pan of cooking fat, it took a united effort on all fronts to defeat the enemy. In their own way, book jackets became a part of the effort with patriotic encouragement from publishers such as Whitman.