Showing posts from April, 2020
Show all

So National Bookmobile Day was several days ago--April 22nd to be exact--and I had no idea there was a day for that. Better late than never, I have a couple of wire service photos to share about a bookmobile in 1949 making the rounds for its patrons young and old in Muskegon County, Michigan. The message inherent in the pair, intended or not, conveys the joy of books for all ages, but I also see something in there about reading habits developed early in childhood staying with children throughout their lives. The young children in the bookmobile appear totally engrossed in the books they have found. A line forms outside the bookmobile and anticipation builds for finding a treasure inside. There is equal engagement with books by the older couple in the second photo. The woman, with her warm smile, appears to enjoy her selection while the man intently ponders two books in his hand, perhaps trying to make a decision with the help of the woman in the bookmobile. T
Post a Comment
Read more 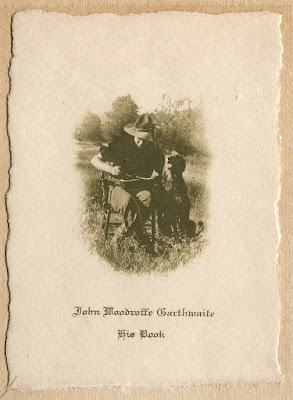 I've been wanting to write about this bookplate since acquiring the book I found it in about eight years ago-- Handel,  by C.F. Abdy Williams, published in 1901 by both J.M. Dent & Co. (London) and E.P. Dutton & Co. (New York). The bookplate's setting features a meadow or pasture, where a young man, John Woodroffe Garthwaite, sits in a chair with a book in his hands and a dog by his side. The current pandemic reminded me of this image and the parallels to social distancing activities we are practicing today to mitigate the spread of Coronavirus (COVID-19). Of course, the scene was composed for reasons other than fighting a pandemic, but the finished product carries a visual message about social distancing into the future some 120 years. Mr. Garthwaite certainly appears socially distanced from any person and is enjoying a fine social distancing activity--reading! The book's publication date and some genealogy research on Garthwaite help date the bookpla
Post a Comment
Read more

As businesses close and struggle to stay afloat during these social distancing times, necessitated by the coronavirus (COVID-19) pandemic, many in the retail sector have been able to adapt by adding delivery or curbside pickup services. I don't know of any bookstores offering this service, but a Tokyo bookstore in 1966 offered a novel concept for the time that parallels 2020 efforts to get control of the deadly virus.  The Japanese bookstore in the wire photo below was called a "drive-in bookstore" by the press. It may well have been drive-in, as the image doesn't appear to show a drive- through for the car. Further research, in an attempt to identify the bookstore by name, was unsuccessful. But some interesting information about the business revealed the bookstore comprised a nine-story building with more than a million books in stock. All one had to do was drive up to the window, tell the "pretty clerk" which book or books you wanted, and the
Post a Comment
Read more
More posts