April 26, 2020
So National Bookmobile Day was several days ago--April 22nd to be exact--and I had no idea there was a day for that. Better late than never, I have a couple of wire service photos to share about a bookmobile in 1949 making the rounds for its patrons young and old in Muskegon County, Michigan. 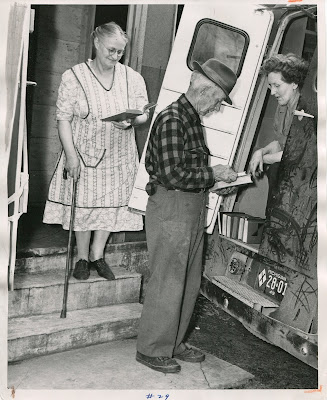 The message inherent in the pair, intended or not, conveys the joy of books for all ages, but I also see something in there about reading habits developed early in childhood staying with children throughout their lives. 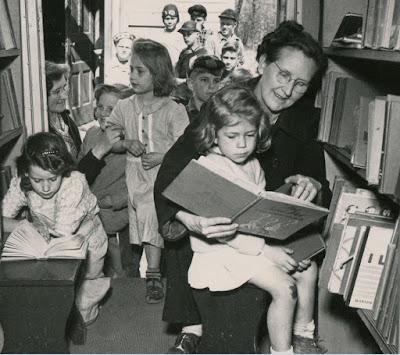 There is equal engagement with books by the older couple in the second photo. The woman, with her warm smile, appears to enjoy her selection while the man intently ponders two books in his hand, perhaps trying to make a decision with the help of the woman in the bookmobile. 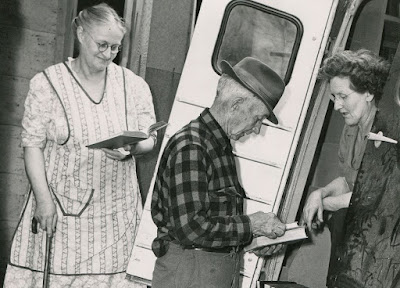 The contrast between the two photos begins and ends with the age of the readers. The greater message here is about the enjoyment derived from books and reading, which knows no age limit and is indeed a lifelong pursuit.

These two wire service photos are credited on the back to photographer Bervin Johnson of Whitehall, Michigan. The librarian, or perhaps bookmobile volunteer, is listed as Mrs. Conrad Caughey. It's a shame her own name wasn't printed because it's an interesting one--Lake Erie Caughey (nee Evans)! There's a story there, I'm sure. I found that bit of information through some basic genealogy searches, but I could find nothing about her work for the Muskegon County Library and their bookmobile. However, I can tell from the photos that she made people happy throughout the county with the pleasure of books.