Showing posts from June, 2013
Show all

The Book Barge in Lichfield

I've written about floating books on this blog before ( Lippincott bill of lading and The MV Doulos ), but here's a new twist on the concept: a floating book barge. I found this on the blog of a London bookseller/poet, Jen Campbell , and though I don't have any related paper ephemera to display, the digital counterpart (i.e., Web site) is too interesting not to post: The Book Barge  of Lichfield in Staffordshire, England. Before disembarking (or is that disem barging ?), be sure to have a look at the Ship's Log .
Post a Comment
Read more

A letter from the New Hampshire State Library, 1898 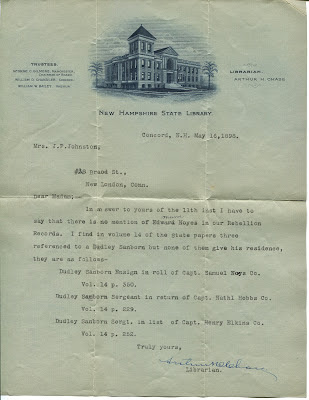 Here is a typed, hand-signed letter from Arthur H. Chase, Librarian at the   New Hampshire State Library , in Concord, NH in 1898.   The library letterhead includes a nice image of what the building looked like at that time. I found recent images of the library at the Web site for Meridian Construction , who did an extensive renovation on the building in 2009. The Web site included photos, as well as text, to document the changes. You'll notice that the upper-floor tower has been removed, but that may have happened well before the recent renovation project. Of Arthur H. Chase, I have very little information. His name pops up numerous times in Internet searches, but usually associated with library bulletins and reports that are in the archives. So even though there's not a lot to write about, I just liked this letter for its design (color and illustration) and origin. New Hampshire figures prominently in my family history. And it appears that family history was the sub
Post a Comment
Read more

Sir Thomas Phillipps  (1792-1872) was an ardent bibliophile, collector, cataloger, publisher, and intense sufferer of bibliomania.  In the title of this post,  Bart.  refers to  Baronet , a hereditary honor by the British Crown. Phillipps once aspired to collect every book and manuscript ever written. In his attempt to do so, his estate, Middle Hill, was full to the gills in every room with the objects of his obsession.  So immense and staggering was his collection, it took well more than a hundred years after his death to disperse all of it through auctions and private sales.  Today, Phillipps might be characterized as a hoarder.  In 1848, he received this envelope below, opened it, and read its contents, possibly book or manuscript related. Somewhere along the way to present day, the contents became separated from the envelope. There's no telling where the letter went, but the envelope found its way here.   The letter, with wax seal still present on the back side
Post a Comment
Read more

June 21, 2013
I recently discovered The American Book Collecting blog, in which Kurt Zimmerman writes entertainingly and enthusiastically about his collection: Books about American book collecting. He also collects books about Latin American literature, but this blog focuses on American book collecting.  What makes this blog particularly interesting to me is the ephemera that complements the books in his collection. Without that, the blog is still fine reading, but I have an affinity for the ephemeral pieces and thoroughly enjoy both in this bibliophile's paean to books and book collecting.  Link over and enjoy!
Post a Comment
Read more
More posts