Showing posts from November, 2013
Show all

An author's letter to Jacqueline Kennedy 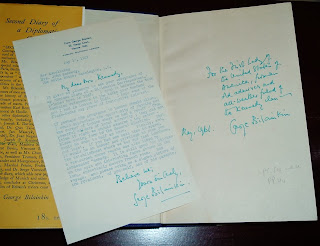 In May of 1961, British journalist and author, George Bilainkin, sent an inscribed copy of his 1947 book, Second Diary of a Diplomatic Correspondent  to  the new First Lady of the United States, Jacqueline Kennedy.  He also included a typed, signed letter on his letterhead and indicated a few pages of interest to the First Lady and perhaps the new President, whom he had known and met with on several occasions in 1945 at the close of World War II. The book and letter were sent to Mrs. Kennedy in advance of an upcoming trip to London, in which the author hoped to meet with both, or at least the First Lady, and revisit a few sites pertinent to his meetings, as a journalist, with a young Jack Kennedy in 1945. He also knew the President’s father, Joseph P. Kennedy, Sr., when he was the United States Ambassador to the United Kingdom. Bilainkin also expresses his wish to take Mrs. Kennedy to lunch and, as if that weren't enough, further requests she bring photos of herse
Post a Comment
Read more

Houston Book Fair at the Museum of Printing History 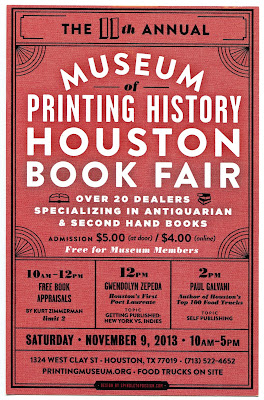 Here's the most recent addition to my collection of bookish ephemera, an ad mailer for the 11th Annual Houston Book Fair at the Museum of Printing History , Saturday, November 9, 2013.
Post a Comment
Read more

Regarding a recent acquisition of ephemera   collected and preserved by the Rasmussens of California , here is another sampling of what that sight-unseen purchase contained. This is the very first issue of the  Newsletter of the IMBS , published by the International Miniature Book Society in Ljubljana, Yugoslavia, August 1984.  It was edited by Dr. Martin  Žnideršič and designed by Kazimir Rapo ša. The editor starts the newsletter with the following: Dear Lovers of miniature books,   In front of you is the newsletter of the new international organisation which wants to bring together the interests of lovers of miniature books from all over the world.   The stated goal is for a quarterly issue for the months of August, November, February, and May. The editor states that this first issue is an experimental one and that the final shape of the newsletter, with member collaboration, will gradually become clear.  For anyone interested in miniature books, I have scanned the
Post a Comment
Read more
More posts