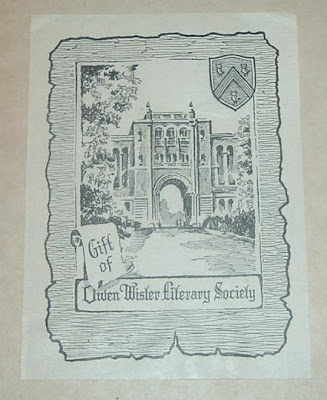 The Owen Wister Literary Society was started at Rice University in 1924 to handle the overload of its sister societies as the university grew and the need arose for additional societies for women students.

Why Owen Wister, the author best known for his novel, The Virginian?

I can find no other reason than that of the acronym, OWLS, formed by the society name. The owl is the school mascot and name of all sports teams representing the university. The Rice Owls. I doubt the ladies had an intense interest in the literary works of Owen Wister. His name was convenient for the acronym I'd guess.

The literary societies were established when Rice began accepting women, primarily for developing an appreciation of literature. The book this bookplate is in is a 1938 volume of poetry by Texas Revolutionary hero, Mirabeau B. Lamar. That seems in keeping for a lit society. But the societies evolved into something more social by the 1950s and hung on until the 1980s.

The Owen Wister Literary Society was established when women were not allowed to live on campus, thus giving them a chance for socializing and an excuse for being on campus in the evening. This link provides a lot more info on the history of Rice's lit societies.