Postcards from the insane asylum

January 08, 2010
Here are a couple of 1880s post cards from Blakiston, Son & Co., publishers and booksellers of Philadelphia, located at 1012 Walnut Street. Medical and scientific books were a specialty, as these mailers indicate by the books they advertise. Both cards are addressed to Dr. Henry M. Hurd at the Asylum for the Insane in Pontiac, Michigan. 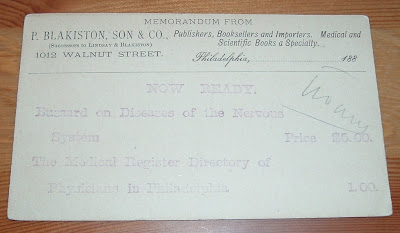 The earliest of the two cards, above, was sent to Dr. Hurd in 1882 and advertises two books that may be of interest to him in his practice: Buzzard on Diseases of the Nervous System and The Medical Register Directory of Physicians in Philadelphia. 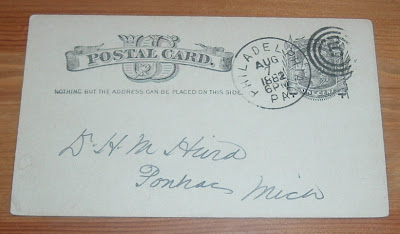 The next card, below, advertises the "just published" GOWERS on the Diagnosis of Diseases of the Brain, a series of lectures delivered at University College Hospital in London, by Dr. William R. Gowers. The post mark does not include the year, or it has worn off, but there is a brief review of the book and author by the London Lancet, dated July 11th, 1885, which helps date when the card was sent. Best guess is that the card found its way to Dr. Hurd later in the same year. 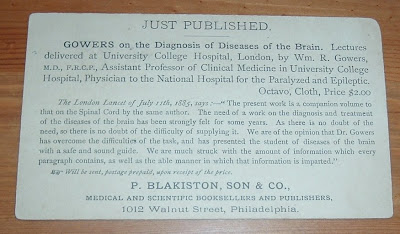 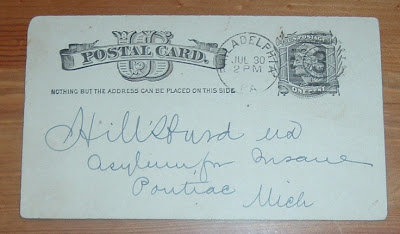 Finding information in the Insane Asylum in Pontiac, Michigan was easy, thanks to an interesting site about the history of psychiatric hospitals in America

The site offers a fascinating history into America's psychiatric hospitals, as stated in the Introduction:

This web site is an attempt to catalog and present America's historic psychiatric hospitals (state hospitals; insane asylums) founded mostly in the latter half of the nineteenth century. The site gives special emphasis on the facilities built on the "Kirkbride plan", but it is not necessarily limited to the Kirkbride hospitals. The Kirkbride plan and the resulting buildings represented great ambition on the part of both psychiatric caregivers and architects.

Kirkbride is Dr. Thomas Story Kirkbride, who assisted the architects of the asylum buildings in designing the basic floor plan used in many of these buildings.

Dr. Henry M. Hurd, the recipient of the Blakiston publisher's cards above, was the first director of the Pontiac asylum, which opened in 1878 and was known through the years by several names, including the Clinton Valley, Eastern Michigan Asylum, Eastern Asylum for the Insane, and Pontiac State Hospital.

The image of Dr. Hurd, as well as those of the hospital where he worked (below) are from the Roots Web site and offer an historical postcard view and a more recent photographic view of the "asylum."

There are many links on this page about this particular facility in Pontiac where Dr. Hurd worked. They include a variety of post card and photographic images of the "insane asylum."

What qualified for "insane" back then could have been a number of things, many of which would have completely different diagnoses today. Certainly, some people were institutionalized because of perceptions, prejudices, and ignorance of the day. But there were many who were mentally ill and in need of treatment. Though this period is partially characterized by the darker aspects of institutionalizing patients and their sometimes questionable or abusive therapies, it also marks a movement of sincere effort to learn about and improve the field of psychiatric diagnosis and care.

These post cards offer a tiny window into the literature of the day on this topic. They also led me to an interesting site that delves into the history of the treatment of mental illness in this country through the many facilities that were developed during the nineteenth century.