March 27, 2010
This certificate was awarded to a young Indiana schoolgirl named May Clark to confirm her membership for the year 1894 in the Young People's Reading Circle of Indiana. 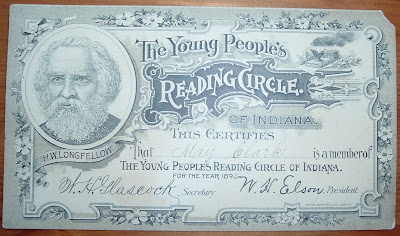 The ornately designed certificate sports an image of Henry Wadsworth Longfellow, inside a symbolic circle, looking as if he were monitoring the reading habits of the certificate holder. The Reading Circle's Secretary, W.H. Glascock, and President, W.H. Elson both signed the certificate. It has survived six score and more in relatively good shape, the only flaw being the nicked upper-right corner.

A little research revealed an age-old concern of adults about certain media polluting the minds of the youth. I didn't realize it was that old a problem or that much of a concern in the 1800s. But one-hundred and twenty-six years ago, adults worried about young May Clark reading the wrong kind of book. That problem might be upside down today with a lot of kids--getting them to actually read a book.

In 1887, Indiana school superintendents met at an association meeting to discuss, among other things, the previous four years of the Teachers' Reading Circle in the state. They reported on the program's success to the point that they thought it could be applied to the students around the state for the same kind of benefits derived from a directed reading program.

At a State Teachers' Association meeting later that year, the idea was again proposed and a committee was formed to study the feasibility of such a program. The idea was overwhelmingly sold to all in attendance and quickly adopted. In the committee's formal response was the following statement:

"We regard the subject one of the highest importance. To place the general reading of the half million of children of the public schools under competent guidance and control, even to a limited extent, would, in our judgment, be productive of most beneficial results. To substitute for the trashy and often vicious reading matter which finds its way into the hands of children and youth a grade of literature at once sound in its contents, chaste in its language and imagery, and pure in its moral tone, is an end which may properly command the best and most earnest efforts of this Association, and of the teachers of Indiana."

I wonder what kind "trashy and often vicious reading matter", impure in moral tone, those curious 1880s kids were reading? How bad could it have been in 1887? Bibliomaven might be able to shed some light on that. His specialty is children's literature from that era.

I guess I'm looking at it through a 21st century prism. It's all relative, I suppose. What was shocking then would certainly be tame by our standards today. But don't we have the same arguments swirling around today about what our kids see and read and the moral decay it causes? Those teachers and superintendents in 1887 could not have even fathomed the ubiquitous violence and sexual content that young people are exposed to today from the Internet, cable/satellite television, and other media. Even the books today that do get children excited about reading might have raised the Victorian eyebrows in 1887 Indiana and elsewhere.