The Holmes Book Company was located here at 274 Fourteenth Street in 1931 according to the postmark date on the postal cover below.

And according to some, a ghost roamed the stacks mischievously throwing books and making some of the patrons feel uneasy. An article on haunted Oakland touches on this phenomenon. You can search the Internet, using the keywordsHolmes Book Company ghost, and find the same or similar references to the spooky goings on in the old book shop building. 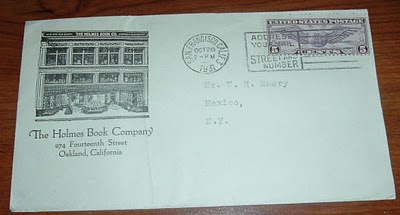 Holmes was Harold C. Holmes, who lived from 1877-1965. A brief biography of Holmes is found at the University of the Pacific in Stockton, where his papers are archived. He was born in Toronto, Canada, but his family moved to the San Francisco Bay Area when he was about five years of age. There, his father started the Holmes Book Company, which had several antiquarian book shops in San Francisco and Oakland and offered the opportunity for Harold Holmes to enter the business. As a teenager, the younger Holmes worked with his father and eventually succeeded him in the family business, which he operated until he died.

Quoting directly from the bio in his archives, Holmes is described further:

An authority on California literary history, in his middle years Holmes was also active in Oakland civic affairs, serving as president of the Oakland Rotary Club (1946-47), a member of the Alameda County Probation Committee (1948), and, a trustee of the California College of Arts & Crafts. Holmes was working on his memoirs at the time of his death.

Those memoirs were published posthumously in a volume titled: Some Random Reminiscences of an Antiquarian Bookseller.

Holmes' descendants have attempted to reincarnate the book shop online, with some difficulty, it would appear: Holmes Book Company. The preceding link does offer some additional history on the company and features a photo of the building (built 1923-24) depicted on the envelope above. From that page, there is a History link that expounds a bit more, but many of the other links are broken or missing content. It has the makings of a fine online store with lots of history and interesting books to offer. I hope it finds its way, but I have to wonder if maybe that ghost has followed the book shop online and is creating mischief in cyberspace with the Internet version of the venerable old book shop...