February 12, 2013
Today, February 12th, is Abraham Lincoln's birthday. Here's a 1944 press photo from the Abraham Lincoln Book Shop in Chicago, Illinois, which I wrote about on this blog three years ago today. Enough time has gone by now and this seemed a good time to repost it, given all the attention Lincoln has gotten recently in books and film. 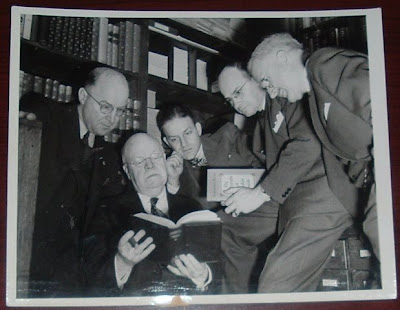 The back of the photo has a typed sheet of paper that appears to be dated 2-8-44. Other notation, for the record: A-37690 and Wide World. The title of the release is "Lincoln's Words Live On." 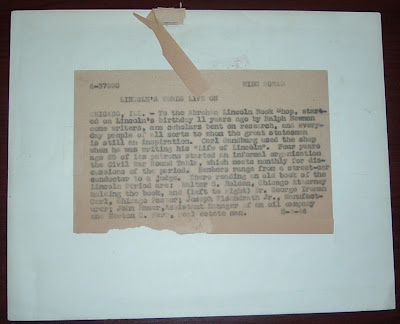 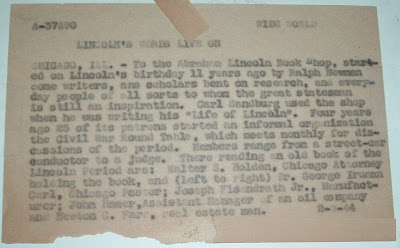 
CHICAGO, ILL.-To the Abraham Lincoln Book Shop, started on Abraham Lincoln's Birthday 11 years ago by Ralph Newman come writers, ans (SIC) scholars bent on research, and everyday people of all sorts to who the great statesman is still an inspiration. Carl Sandburg used the shop when he was writing his "Life of Lincoln". Four years ago 25 of its patrons started an informal organization the Civil War Round Table, which meets monthly for discussions of the period. members range from a street-car conductor to a judge. There reading an old book of the Lincoln Period are: Walter S. Holden, Chicago Attorney holding the book, and (left to right)Dr. George Truman Carl, Chicago Pastor; Joseph Eisendrath, Jr., manufacturer; John Hamer, Assistant Manager of an oil company; and Newton C. Farr, a real estate man.

The old book shop is still around at 357 West Chicago Avenue in Chicago. It was established in 1938, so was a mere six years old when this photo was taken. I doubt they allow cigar smoking in the shop now (the man holding the book has a lit stogie!). Click on this link to see the Abraham Lincoln Book Shop today.

And here are a few links for Lincolniana: