January 23, 2008
The Leggat Brothers, in New York City, 1888, claimed to own and operate the cheapest book store in the world, with a million new and second-hand titles in stock. All this as advertised on their letterhead for that year. 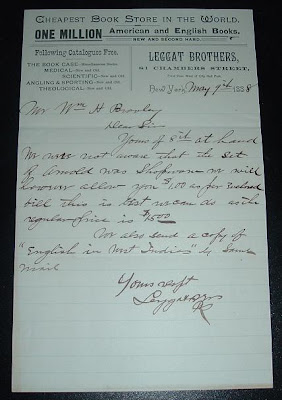 In this letter of May 9th, 1888, the bookseller acknowledges receipt of the customer's letter and claims to have had no knowledge about a recent shipment of a "set of Arnold" being shopworn. Evidently, the customer had written to complain that the books arrived in less than advertised condition. From the tone of the response from Leggat, it appears the customer had asked for a bit of a discount in light of the condition. Leggat allows one dollar off the $15 set, as reflected on an enclosed bill (not present with this letter). And it appears they also enclosed a complimentary copy of a book referred to as English in West Indies. 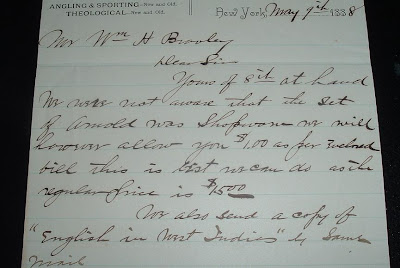 I was prompted to search three things. First, the customer's name: Wm. H Brawley. The last name looks like it could be Bravley (which yields nothing in search results), but if it's Brawley, there's a good chance it could have been the same William H. Brawley who was a member of the South Carolina House of Representatives in the 1880s and later a U.S. Congressman in the 1890s. The timing seems right, date-wise.

Second, I wondered about the complimentary book and found about 40 copies online of the following, all printed in 1888, same year as the letter: The English in the West Indies, or the Bow of Ulysses, by James Anthony Froude. Prices range currently from $15 to $750.

Third, what was the set of Arnold for 15 bucks? The English poet Matthew Arnold came to mind immediately, but I could only find one "set" that fits the timeline for this letter: The Letters of Matthew Arnold, 1848-1888. Two Volumes. This set was a second printing from 1895, so maybe the first printing came out in 1888 (coincides with date in title). If so, that might help answer a fourth question about why Leggat chose the complimetary title they did to send the customer. 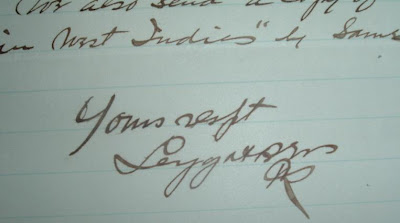 If all assumptions are correct, the South Carolina congressman had a taste for English literature and appears to have been a discriminating collector, with condition being important. A little shelf wear was not acceptable. Hopefully, the discount and the English West Indies history were. I think the bookseller handled the complaint graciously and satisfactorily.