February 12, 2008
Bookplates are gaining significant traction with regard to my bibliophemera collecting interests. Last week, I went around the house to the various rooms where I have old books shelved and scanned all the inside covers and first few pages for bookplates. They're not alway affixed to the front endpapers. Some wind up on the half-title page or the facing blank page. And I found a pretty good batch right under my nose. It was exciting to open up old, familiar books as if I'd never seen them before and find old bookplates I didn't know were there. At a few antique shops over the weekend, I browsed for older books stuffed away in the nooks and crannies more for decoration it seemed than anything else. And again I found a few intriguing bookplates. I bought the books.

I've been researching and cataloging my new collection and will display a few here. 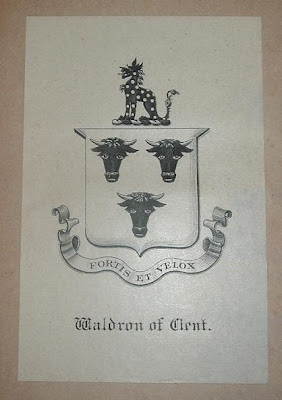 This is from one of the antique shop finds over the weekend. Waldron of what... Gent? Kent? The Waldron family shield or crest obviously. Here's some of what I learned at http://www.binary.co.nz/wald2.txt:

That name originated in Germany before the Norman conquest of England in 1066 and was one of many old German names brought to England with the army of William the Conqueror. There are a number of Waldron coats of arms, one of which features three black bull's heads. The family motto is either fortis et velox (brave and swift) or spectemur agendo. 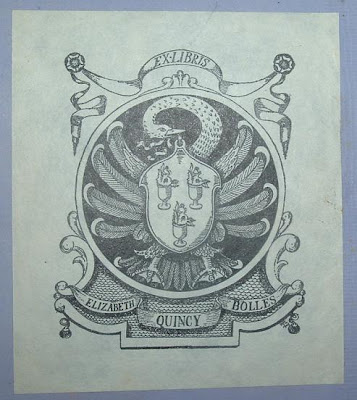 This one is a bit spooky. It was in a book lying around the house as part of a decorative arrangement by my wife, who bought the book years ago on a New England trip. It's just an old pocket-sized volume of The Lady of the Lake, one in a reprint set of Walter Scott's poetical works. Nothing special, but it helps to date the bookplate. The name was familiar as I looked at it because (and this is where it gets spooky) I had just the day before been looking at a copy of a book I have, Land of the Lingering Snow, by Frank Bolles (Houghton, Mifflin and Company, Boston, 1891), which I bought years ago on ebay because it contained an essay about a trip to Chocorua, New Hampshire, a place very special to me and my family history. As it turns out, Elizabeth Quincy Bolles from the bookplate in the Walter Scott book was Frank Bolles' wife! She and Frank had been neighbors in our house, in adjoining rooms, in book and plate form for several years. It took my recent interest in bookplates to make the connection. In researching Frank and Elizabeth Bolles, I was able to find photos of both at Stephen Ells' Web site, as well as a good bit of information on Frank, who was a writer, naturalist and Secretary of Harvard.