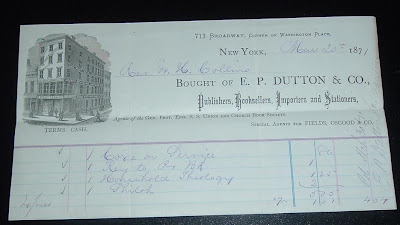 Click anywhere on the photos for an enlarged view
Think of E.P. Dutton and you probably think big publishing company. But this major publishing house got its start as a retail bookseller.

Edward Payson Dutton started the company in Boston, as a retail bookseller, in 1852. In 1864, Dutton branched out to New York (in the building depicted by the billhead graphic), where they also started publishing books. Their focus in the beginning was religious titles. If the billhead above is any indication, it appears that religious titles were still a strong suit into the 1870s. 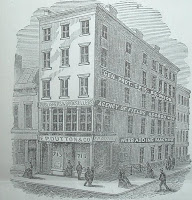 1864 was a busy year for Dutton. As mentioned, he opened the new branch in New York and introduced a publishing segment to the business. But back in Boston he also purchased Ticknor & Field's retail business, which was located in the Old Corner Bookstore. There, the mantle of a fine literary tradition passed to Dutton. Ticknor & Fields had occupied the building for some 20 years and had published the works of authors such as Henry Wadsworth Longfellow, Harriet Beecher Stow, Nathaniel Hawthorne, Ralph Waldo Emerson, John Greenleaf Whittier, Oliver Wendell Holmes, Charles Dickens and Louisa May Alcott.

Dutton's stewardship of the Old Corner Bookstore was short lived. After four years, they sold the retail business and left Boston. Bookselling and publishing would, for the next 15 years, take place in the building shown here on the billhead of a typical day's transaction in 1871--theology and religious books sold to a Rev. Collins.