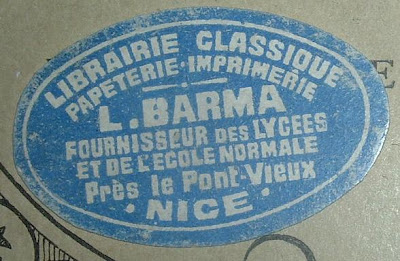 From the same book (Corneille's Polyeucte) that contained the Scofield Thayer bookplate (previous entry on this blog), here is a nice old book shop trade label affixed to the front cover. As the title implies, bookseller L. Barma (of whom, I can find nothing) sold classical literature, among other things. Having learned a bit about the book's owner, Scofield Thayer, in the previous post, this was a fitting purchase for him because of his academic interests in philosophy and the classics in his post-graduate studies. A bit of chronology will help date the bookseller and his trade label. Thayer matriculated Harvard in 1913. After graduation, he went to Oxford, which would be about 1917 or 1918. Thayer likely journeyed to France around that time and found this book shop in Nice. So I think the label dates circa 1918. An interesting side note: The book was published by Hachette in Paris, 1906. So Thayer, with all his money, bought a used book from a rather inexpensive series. There must have been something about this book and/or the series it belonged to. Perhaps it had to do more with its convenient pocket size. 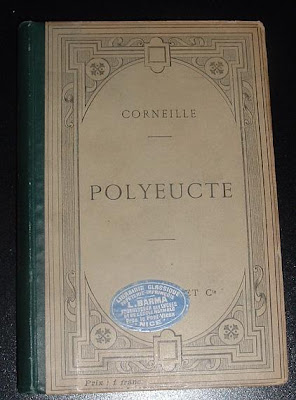