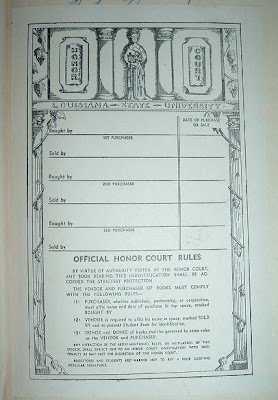 From a 1937 college textbook, here is a label, or sticker, from a university Honor Court. The University of Louisiana State (LSU) Honor Court to be exact.

Looking like an over-sized bookplate, it is affixed to the front pastedown endpaper (inside cover) of the book. The apparent intent of this label was to track the transactions of this book between all buyers and sellers. It is also apparent that any such attempts to do so with this particular book were unsuccessful. The label is blank.

Honor Systems and Honor Courts exist, in general, to deal with students who lie, cheat or steal. The history of such institutions in this country (America) goes back to the founding fathers. Thomas Jefferson created the first Honor System--for his alma mater, the College of William and Mary.

Honor Systems and Honor Courts are still around today--some are taken seriously, others not. The primary use for these courts is to deal with cheating and other moral infractions. So why was such a label needed for a textbook? Did LSU have a book theft problem on campus during the 1930s? 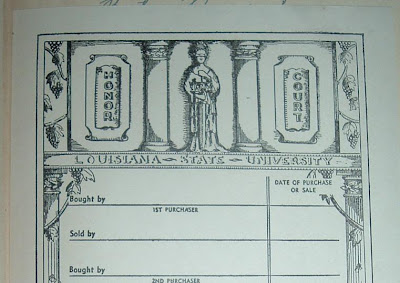 The rules on this label, and subsequent warnings for not following them, are laid out in no uncertain terms. Vendor and purchaser will sign their names and indicate the date of the transaction. The vendor has the further obligation of presenting the book for student identification. Not sure what that means exactly. Present to whom? The student? Surely, he or she has already ID'd the book before purchasing it. They've already signed the label, so they had to be holding the book, right? 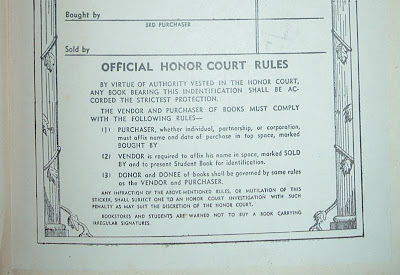 Any infraction of the above-mentioned rules, or mutilation of this sticker, shall subject one to an Honor Court investigation with such penalty as may suit the discretion of the Honor Court.

Sounds pretty serious, this signature business. And the "penalty as may suit discretion of the Honor Court" left the punishment wide open. Probation, expulsion, public ridicule... How severe a punishment should be meted out for failing to sign a label?

The second and final warning at the bottom of the label reads:

Bookstores and students are warned not to buy a book carrying irregular signatures.

How would a student know if another student's signature was irregular? How many students pay close attention to their fellow students' signatures? And did an LSU student ever report a textbook to LSU's Honor Court on suspicion of an irregular signature? I'd bet against it.

This whole transaction-tracking and signature analysis stuff must have seemed trivial to the owner of the textbook with this LSU Honor Court label. He didn't bother with it. In fact, the label appears to have been an afterthought to the transaction. It's evident by the writing on the front endpaper that the Honor Court label was affixed after the student had purchased the book and written his name, a couple of addresses, and two different phone numbers. The Honor Court could have thrown the book at this guy.