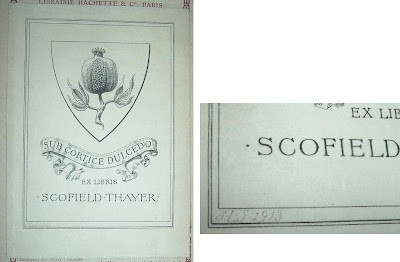 This bookplate is significant for its designer and owner. Sidney L. Smith (pictured left) was a well-known engraver of the late 19th and early 20th centuries whose prolific work with bookplates warranted the book, Bookplates by Sidney L. Smith with a Check-list of the Bookplates, by Gardner Teall, published by Alfred Fowler, 1921.

The bookplate's owner, Scofield Thayer, was a poet, editor, publisher, and important art collector. He came from wealth, was educated at Harvard and Oxford, and his literary lineage included an uncle, Ernest Thayer, who was famous for his beloved baseball poem, Casey at the Bat.

But Thayer was probably best known for his art collection and for transforming The Dial, with his wealthy inheritance, into a premiere publication for literature and the arts in the 1920s. Much of the art featured in the magazine was from Thayer's personal collection, which is now in the Metropolitan Museum of Art in New York.

Thayer associated with a Who's Who of literary figures from his era, including E.E. Cummings, who Thayer commissioned to write the poem Epithalamion for his marriage to Elaine Orr. In short time, the marriage soured, and Cummings didn't help matters by having an affair and fathering a child with Thayer's wife. I would suppose that finally put the kibosh on the nuptials, not to mention the friendship with Cummings.

Poor Thayer began to suffer mental problems and by 1926 had resigned as editor of The Dial. By 1929, The Dial ceased publication, having lost its financial support. Thayer , though ill, lived another 50-something years in the care of family and various institutions. His time in the spotlight was brief, but what an impact he made.