Even in a pile of old newsletters published about the Spanish Civil War, a book-related subject rises, like cream, to the top. It was interesting to find an article on the 1938 Barcelona Book Fair (Fiesta del Libro) among the columns about bombing, rebel offenses, and the destruction of Guernica.

News of Spain was a weekly English language newsletter published by the Spanish Information Bureau in New York City. This issue was published July 6, 1938. 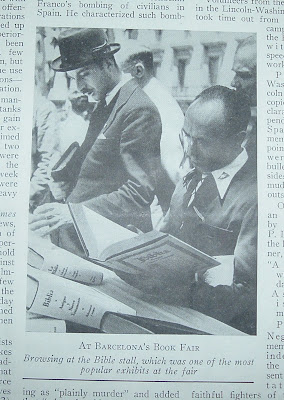 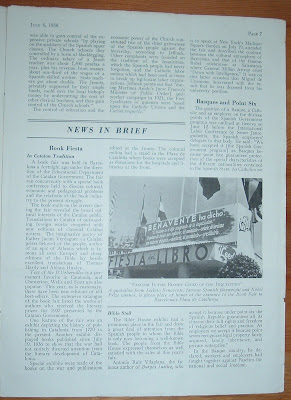 Excerpts from the article:

A book fair was held in Barcelona a fortnight ago under the direction of the Educational Department of the Catalan government.

The fair ran concurrently with a special book conference held to discuss cultural, economic and pedagogical problems and the relations of the book industry to the present struggle.

One feature of the fair was an exhibit depicting the history of publishing in Catalonia from 1770 to the present.

Another exhibit displayed books published since July 19, 1936 to show that the war had not entirely diverted attention from the literary development of Catalonia.

The cultural militia had a stand in the Plaza de Cataluna where books were accepted as donations for the hospitals and libraries at the front.

The Bible House exhibit had a prominent place in the fair and drew a great deal of attention from the Spanish people to whom the Bible is only now becoming a well-known book.

A quotation from Nobel Prize winner, Jacinto Benavente, is given a place of honor at the entrance to the Book Fair. It states: Fascism is the Bloody Child of the Inquisition