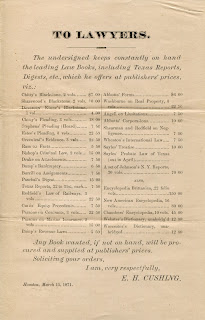 Here is my earliest example of ephemera related to a bookseller from my hometown of Houston. Meet E.H. Cushing, circa 1871.

Edward Hopkins Cushing, of Vermont, came to Houston in the 1850s, for a bit of adventure it would seem, after graduating from Dartmouth. He wanted to teach and did at three schools in the Houston area before getting involved in the newspaper publishing business. Writing for a newspaper eventually led to part ownership of the paper and later a controlling interest in another paper, the Houston Telegraph, which he used to promote his ideas for business and education in his beloved, adopted hometown of Houston. His interest in the arts and sciences extended to Texas authors, agriculture, and horticulture. An accomplished horticulturist, Cushing is reported to have had one of the most complete collections of flowers on his estate, Bohemia, in the United States. 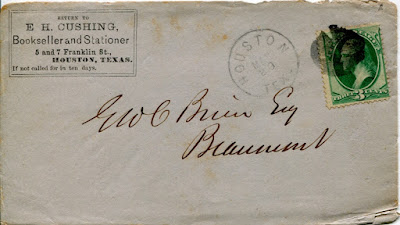 During the Civil War, Cushing kept his publishing business afloat, sometimes using wallpaper or whatever was handy to print his newspaper. But his politics leaned in favor of secession, which curried no favor with the Reconstructionists after the war. In fact, Texas' Reconstruction governor, Edmund J. Davis, recommended to President Andrew Johnson that Cushing be hanged instead of pardoned for his actions in the war. If the governor ever entertained ideas about publishing his memoirs after leaving office, I doubt Mr. Cushing would have made the short list of potential publishers!

After the Civil War, Cushing was lured to bookselling, sold his newspaper business and bought an existing book and stationary business on Franklin St. in Houston. There, he sold books like the ones in his brochure, shown above, until he died in 1879. I don't know if he specialized in law books. As he was a man of many interests, I think he probably stocked books on a variety of subjects.

Cushing's interest in books extended beyond bookselling into printing and publishing, as evidenced by this auction from Dorothy Sloan Books, of Austin, in 1998:

First edition of a rare promotional, with an excellent map. Adams, Herd 303: "Rare. Chapter on stock raising." Day, p. 85. Graff 387: "Devoted to the enticement of immigrants." Howes B714. Rader 460. Raines, p. 30. Winkler-Friend 2779. Promotional touting resources and opportunities in Texas, including cotton, sugar, corn, and wheat farming, stock raising, lumber, manufactures, railroads, lands for sale, ads for businesses in Houston and Galveston, etc. In his glowing section on "Society in Texas," Brady declares: "Outrage, arson, forgery, swindling, and malicious mischief rarely occur in Texas." The fine map of Texas contains insets of "Plan of the Environs of Houston" (showing Houston-Galveston area with railroad and wharf connections) and a general map of U.S. and Mexico. See New Handbook II:458 for more on Cushing.
($1,000-2,000)

The book realized a price of $1,725. Note also that the publication date of the pamphlet is 1871. Cushing is credited as publisher/printer, so evidently he did not completely divest himself of publishing and printing interests when he entered the bookselling business (bookstore brochure above also dated 1871).

Now, if I can find out who used to own the business Cushing bought and collect a billhead or letterhead from them, they would be my earliest among Houston bibliophemera. And I'd also like to know if Cushing's business survived his death, either in his name or another at the Franklin St. location or elsewhere.