January 07, 2009
In 1964, bookseller/bibliophile Paul H. North, Jr. wrote a letter to author Henry Miller requesting inscriptions in a few of Miller's books he had purchased from a mutual friend or acquaintance. That letter is pictured below. 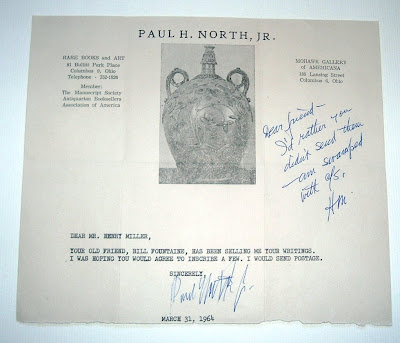 Miller replied directly on the letter and enclosed inscriptions on articles of some kind. He also included a brief note on his own letterhead (below). Miller evidently didn't want to be bothered with receiving and mailing packages of books, as indicated by his reply on North's letter, and hoped his enclosed signatures would suffice (stated on Miller's note below). 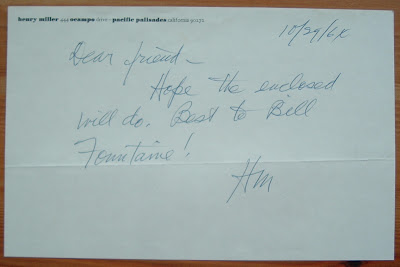 This correspondence came into my possession a few years ago and included a follow-up letter from North, in which I learned that North had sent Miller some blank fly leaves for signatures. Miller apparently signed and returned them with the note above. North thanked him for it, but seemed perplexed about the reactions of another mutual friend for his having corresponded with Miller.

The fly leaves might have been sent to Miller after North received a reply to his first letter. Miller did enclose something in his reply to North's first letter, so why would North send him blank fly leaves for more signatures? I assume he wasn't quite satisfied with what he got and pressed for something more. And it would appear that Miller was kind enough to oblige.

But there is more to this story, which I may report on if I can ever piece it together. In a follow-up letter to Miller, thanking him for the signed fly leaves, North seemed puzzled about something toward Miller and angry toward the second mutual friend. He apologized to Miller for any intrusion on his time, but had some less-than-complimentary comments about the character of the mutual friend.

Because of the relatively recent year (relative to the older ephemera posted on this blog) of the correspondence and the names mentioned in the letter, I won't post an image of the entire letter here. I doubt any of those involved in this correspondence are still alive, certainly not Miller. And North seems to have passed away, as Internet searches reveal that some of his personal collection (i.e., signed Steinbecks) with his ex libris are residing in the inventory of other booksellers now.

But it's been a mere 45 years since the correspondence took place, so it's possible one or more mentioned may still be around. Until I learn more, I have to leave any Miller fans with this teaser: 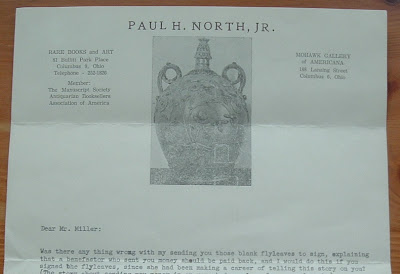