January 13, 2009
The labels I find inside books usually consist of bookplates, book shop labels, school labels, etc. Now I can add radio station labels to the list. My first one of these is from KTIS in Minneapolis, the radio voice of Northwestern Schools (Bible School, College of Liberal Arts, and Theological Seminary).

This promotional label for both the radio station and the college that owned it could date back as far as 1949 because the KTIS came on the air that year. The book it was found in is a later printing of the The Disciplines of Life, by V. Raymond Edman (1948). Without knowing the printing history of the book, my fourth printing could have been in the following year or in any year after that, up to the time zip codes began. The address on the label has Minneapolis 3 Minnesota. Another clue is the FM station indicated on the label. FM radio got started in the 1930s, but didn't begin to flourish until sometime after its inventor's suicide in 1954 (interesting FM history here). Likely, this label dates closer to 1960, giver or take a few years.

KTIS, and its Christian programming, is still on the air all these years later and it looks like they will be celebrating their 50th anniversary this year. I haven't found any mention of this, though, on the KTIS Web site.

Fifty-year-old radio stations are not that unusual. But 50 years of the same format seems very unusual. KTIS started out with a religious/Christian format and they are still humming along with basically the same format--radio programming for a Christian audience. Not only that, but they are still owned and operated by Northwestern College (nee Schools). Of course, being owned and operated by a theology-oriented college probably accounts, to a large degree, for the longevity and consistent format.

The Houston area market I live in has seen so many format changes among its radio stations, especially in the last 10 years, that I can't think of any that have the same format they had 50 years ago. The biggest change I can find with KTIS is their location. They moved all the way from Minneapolis to their Twin City location of St. Paul.

Many years ago, though, in Minneapolis, KTIS gave away a copy of The Disciplines of Life and affixed their "souvenir booklet" label on it. And now it's a unique "souvenir" in my collection of bibliophemera. 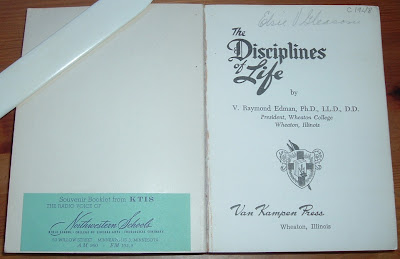