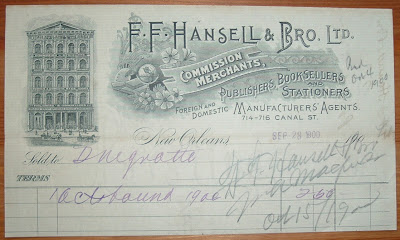 But for the winds of fate that first weekend in September of 1900, the building pictured above (and below), may have crumbled and the publishing & bookselling firm of F.F. Hansell in New Orleans would not have had produced the billhead above.

What if the Great Storm of 1900 that leveled Galveston on September 8, 1900--America's worst natural disaster--had caught steering currents that took it north well before a Texas landfall?

Hansell's billhead, dated September 28, 1900, owes its existence to the elements of nature, whatever they were at the time: High pressure over New Orleans pushing the storm west? A weak front approaching the Texas coast, pulling the storm toward it? Whatever, this storm could just as easily have veered north with a change in conditions and destroyed New Orleans.

A lot of these storms that enter the Gulf of Mexico seem to make that right turn before striking the Texas coast. We (Houston-Galveston area) got lucky last summer with Gustav. Not so lucky with Ike. 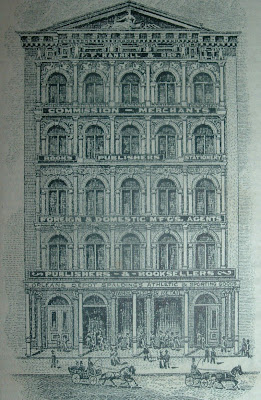