A handbill for Chrome Horse Chronicles 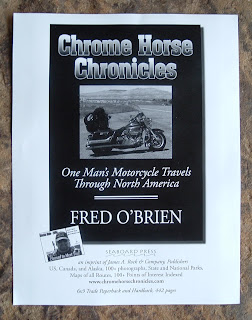 In recent months, I've written a few posts about old handbills that advertised books of the day. Stepping out of the antiquarian and back into the present, I have here a handbill promoting a book that was just published last year, 2008. I typically use this blog for posting about vintage ephemera related to the book trade, but this handbill is for a book that's very special to me: Chrome Horse Chronicles, by Fred O'Brien (Seaboard Press, 2008).

I traveled vicariously with this author as he traversed the continental US, Alaska, and Canada on his Harley. And I listened to his stories when he returned from his journeys. I also read the drafts of his journals when he put those stories into writing from carefully recorded notes taken along each route. From Texas to the Grand Canyon, his first trip. From Texas through the eastern US into New England and beyond to Nova Scotia. Up the Mississippi River to its source in Minnesota. To the Rockies, from Colorado to Montana, and into Canadian prairies. To California and up the Pacific coastline. And his last great ride--Texas to Alaska.

But these trips were not merely Point A to Point B, get on the Interstate and see how far you can go. He strayed from the Interstates onto the "blue highways," soaking up the landscape and the culture and humanity of its inhabitants. 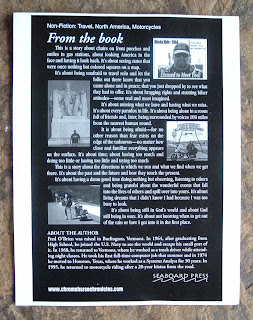 Fred collected his notes and journals from more than five years of traveling around the continent on two wheels and channeled his observations of places and people into a book format. I was privileged to read chapters as they came to conclusion and to hear about the progress, or lack of, in getting his book published.

Through rejection slips and encouraging letters, he maintained a positive frame of mind. If it was worthy of publishing, it would find its publisher. If not, well, he had his journals to read, but more importantly he had the satisfaction of having lived a dream. He had gone out and done what many only talk about doing. And then he added another accomplishment--the daunting task of actually writing a book.

Sadly, he would not live to see his book published. A driver pulled out in front of him on a Colorado road and Fred's journey on this earth ended. After some time, his wife, Carol, was able to continue with Fred's dream to publish his book. She made it her dream, too, and succeeded after a few years in seeing the finished product.

The appreciation for writing that Fred and I shared extended to music, for which Fred was a walking encyclopedia. I learned much from him and shared a very special moment with him one night at a small Houston club. We met the legendary Rock and Roll Hall-of-Famer Levon Helm back in the club's kitchen between sets and I took a picture of the two of them together. Levon was truly an American musical icon to Fred. He told me the only other person he would do that with would be Bob Dylan. He didn't care about celebrity brushes with anyone else or getting autographs or posing for pictures. That just didn't interest him. We did get to see Dylan together one year, but it was at the Houston Livestock Show and Rodeo with about 50,000 other people.

I always remember something Fred said, when lecturing me on the finer points of Dylan's music: "If I had to go on a long journey somewhere and could only take one album, by anyone, to listen to, it would be Dylan's Blonde on Blonde." That masterpiece blew him away in 1966 and never left him. But the year before, Highway 61 Revisited (and Fred did ride Highway 61) contained a song that lends some appropriate words from a lyric to this post:

"You used to ride on the chrome horse with your diplomat…"
-from Like a Rolling Stone, by Bob Dylan

Fred used to ride a chrome horse, but the diplomat he rode with was himself. He was an ambassador of discovery, an honest man searching for grace. The farther he traveled on forgotten highways, as well as in life, the closer he got to himself. And the more he found of himself, the more he could see in others. His was a deeply meaningful journey into the lifeblood of a country, its people, and into the heart and soul of the observer on the chrome horse. Ride on my friend.