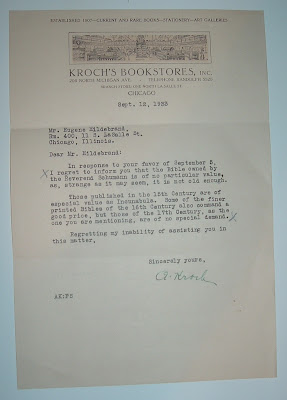 Here is a letter from Kroch's Bookstore in Chicago on company letterhead, dated Sept. 12, 1933.

Kroch's was a twentieth century institution in Chicago, having gotten its start in 1907, by Adolph Kroch, as a German language bookstore. By the time this letter was written, the company had long since changed its business model to become an English language bookseller.

Later still, under the guidance of Adolph's son, Carl, they would become Kroch's & Brentano's, the largest privately owned bookstore chain in the United States, with several stores around town. An innovative force in bookselling, their pioneering concepts in book display and store design became common throughout the industry.

By 1993, though, Kroch's was facing serious challenges as changes were sweeping across the bookselling world. The big discount chains like Crown Books and Barnes & Noble were giving the independents a run for their money and running many off. Indeed, the New York Times reported on this, insinuating that bookselling would never be the same again.

Well, they were right, and Kroch's & Brentano's closed its doors in 1995, but the Times' forecast did not include the tsunami that was forming and about to catch everyone off guard--the Internet's World Wide Web. Within several years, whatever havoc the big chain stores had wreaked upon the "little guys" the next revolution in bookselling--online, e-commerce--delivered the knockout blow for many. They simply could not withstand the one-two punch of competitive big chains and the Internet. The big bricks & mortar chains took their licks, too. 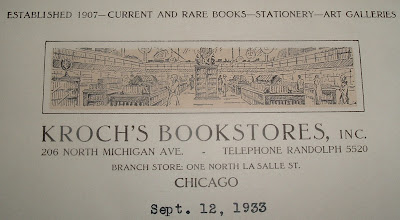 Back to the halcyon days of this letter... Adolph Kroch is responding to a Mr. Hildebrand about a 17th century Bible that belonged to a Rev. Schumann. I take it the Bible was in Mr. Hildebrand's possession and he was trying to determine if it had any value for Mr. Kroch. Evidently, it didn't, as Mr. Kroch explained in no uncertain terms. Fifteenth century, as Incunabula, and some fine printings of sixteenth century bibles, yes, but nein for 1600s.

I got to thinking about that. Seems to me there would have been some value there. Then again, this was more than 75 years ago and it may not have had much value to a bookseller, but I couldn't believe that was true today.

A quick check produces Bibles of that vintage for sale in high three-figures and also in four figures. Condition and collectible points for particular Bibles could send prices much higher. Inflation? Or jut a change in collector interest and collectibility?

Both, perhaps, and don't forget to factor in the economy of the Great Depression. But a general statement about Bibles of an entire century, the 1600s, not having enough value, even in 1933, because of the century in which they were published, still seems hard to swallow.

As I just used the Internet for a general search, maybe the Internet would have helped Mr. Kroch research this particular Bible and its previous owner, Schumann, on a deeper level and make a better assessment of its value.

But he had to rely on his own knowledge of rare books and his business experience to make a determination. These are rare tools for many Internet-age booksellers who rely on quick-search databases and hand-held scanners to make their determinations about a book's value. I stand guilty of the former, but am learning, with experience, to consider criteria beyond Internet search results. Like Adolph Kroch had to do in 1933 on a full-time basis.

So who am I to question Kroch's judgment of a book's value, in his times, just because I find value in it today? My judgments come not from experience with rare Bibles, but with one rare Bible. One handed down to me through ten generations, dating back to 1732 and my Pennsylvania German immigrant ancestors. They bought a German Bible back home to take on their voyage to America and their new home. I am a temporary steward of this book and for me it's priceless, regardless of what any bookseller or Internet search results might have to say about it.