At the Houston Public Library's Friends of the Library sale a few weeks ago, I found a decent first edition of The Quirt and the Spur: Vanishing Shadows of the Texas Frontier, by Edgar Rye (W.B. Conkey Company, Chicago, 1909). Despite a few library markings, I knew it was still a keeper with good resale value, but it was a double serving of bibliophemera inside the book that sweetened the deal and may also render any resale bittersweet.

Opening the book revealed on the front endpapers an old bookplate from the Houston Public Library, acknowledging the donation of the book by H.H. Fletcher. I've come across a couple of the old library bookplates before, but it's always nice to have extras in my collection. But on the facing page was the prize--a business card from the Anson Jones Press, from the owner no less, and the same H.H. Fletcher who donated the book.

On the back of the card, which is creatively hinged onto the page, is a handwritten note from Fletcher to librarian Julia Ideson, the first librarian for Houston's first public library. He is apparently recommending a bookbinder, a Mr. Kerman, who had done work for him before. I'm not sure why the business card was affixed to the endpaper, but I'm glad it was. It started me on the research trail of this Texas bookseller/publisher. 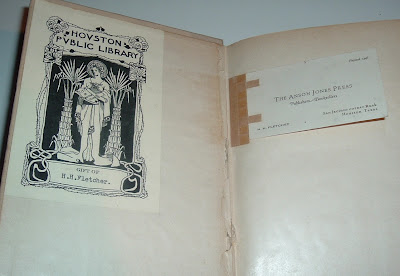 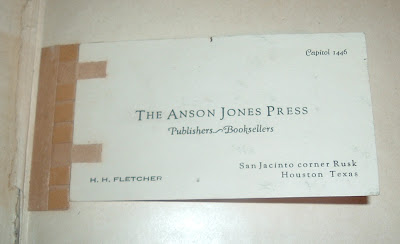 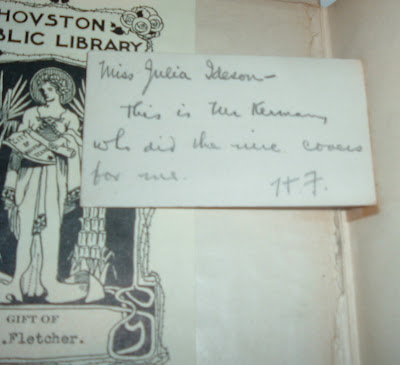 Collecting and selling books in Texas, I've run across old books published by the Anson Jones Press. In fact, I also found and purchased at the recent library sale an Anson Jones Press title--a signed copy of Corduroy Road: The Story of Glenn H. McCarthy, by Wallace Davis (1951). More about this book in a future post, hopefully. McCarthy, a giant among Texas oilmen, was the inspiration for Edna Ferber's Giant. 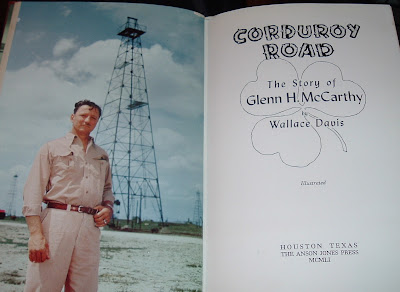 I didn't know anything about the Anson Jones Press before, other than it was named for one of the heroes at San Jacinto, the decisive battle for Texas independence, and the last president of the Republic of Texas. I never bothered to research the history of the company until now. As a native Houstonian, I'm always interested in hometown history, so it was especially rewarding to learn that the Anson Jones Press got started in downtown Houston on, appropriately enough, San Jacinto at Rusk in Fletcher's Book Store.

Herbert Herrick Fletcher and his new bride, Thelma Rawls Fletcher (interesting oral history here), moved to Houston from San Antonio in the 1920s and he went to work for Pillot's Bookstore. A year later, he hung out his own shingle and went into business as Fletcher's Book Store. About 1929, a Mrs. Williams came into the store with a story about a warehouse full of old Anson Jones books and wanted to know if Fletcher would be interested in purchasing them. Seems they'd been sitting in storage since the Civil War.

From the Special Collections and Rare Books Department at the University of Missouri Library, I learned that it was just one book: Memoranda and Official Correspondence Relating to the Republic of Texas Its History and Annexation Including a Brief Autobiography of The Author By Anson Jones Late President of the Republic of Texas (D. Appleton and Co., NY, 1859). 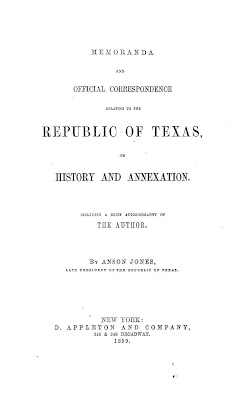 One book, but 585 copies left over from the original printing in 1860. Jones' wife had refused them for some reason and there they sat until Fletcher accepted the offer and started a new publishing venture from the proceeds of the books' sales. He named his new publishing company after the source of its financing--the Anson Jones Press--and its emphasis would be on Texas history and authors. The Fletchers' grandson, Hugh Fletcher, has a site that lists all of the Anson Jones publications he is aware of and also provides a little history on the press as well.

Anson Jones' book, by the way, can be viewed, page by page, at the Portal to Texas History, hosted by the University of North Texas Libraries.

The Fletchers moved their bookstore and the Anson Jones Press to Salado, Texas in 1954, where they still thrive, run by descendants. As for Anson Jones, he only wrote that one book, whose ultimate legacy would be getting a press named after its author and getting more books about Texas published. Jones committed suicide in 1859 at the old Capital Hotel, later the historic Rice Hotel (now Rice Lofts), just several blocks away from where all those copies of his book wound up, giving rise to the press that bears his name. 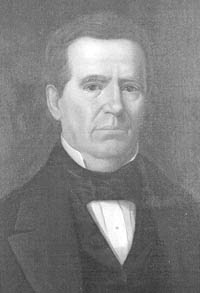 Portrait of Anson Jones
from the Texas State Library