Books on the water, Lippincott bill of lading

April 13, 2009
Shipping books in 1870 from one seaport city to another could literally require ships over rail to do the job. So a Philadelphia bookseller & publisher wishing to transport an order of books to Boston might opt to send them by water on a merchant ship. The conveyance of those books from shipper to recipient was documented with a now collectible piece of ephemera known as a bill of lading.

The document I'm featuring here today illustrates the above example. Here is a bill of lading for the Philadelphia bookseller & publisher, J.B. Lippincott, who was shipping a box of books to G.& C. Merriam of Springfield, Massachusetts (via Boston). 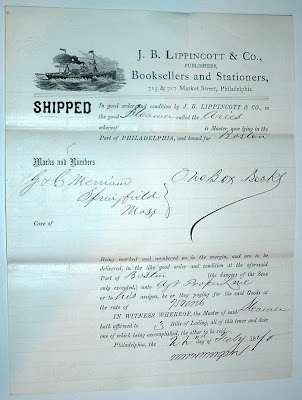 Merriam was the same Merriam of Merriam-Webster Dictionary fame. As for the SS Aries, for any steamer enthusiasts, here is the story behind the former Civil War vessel.

These documents usually depict the ship, as is the case here. For railroad bills of lading, the document usually uses a locomotive image. If transport was by river or canal, paddle wheelers or canal boats are often depicted. These are interesting pieces of Americana that offer insight into commerce and transportation during those eras in which they were created--the nineteenth century in the case of this Lippincott document.