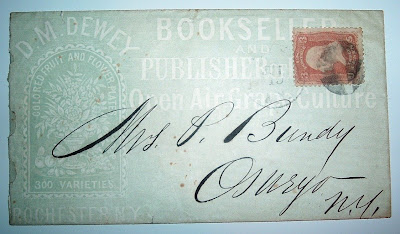 This ad cover for D.M. Dewey, Bookseller, in Rochester, New York was intriguing enough to research and see what kind of story might be lurking in the archives. The ad for colored fruit and flower plates hinted strongly that Mr. Dewey might have a more interesting history than the average bookseller & stationer of the day.

Dellon Marcus Dewey was a bookseller from the mid-1800s until the 1870s. During that time, Rochester, New York emerged as a leading center for the American nursery industry. The entrepreneurial Dewey tapped into that market's growth by publishing and selling color plates of fruits and flowering plants. These plates were invaluable sales aids for nurserymen and have become quite rare and collectible today.

Dewey claimed to have been the first to provide nurserymen with fruit plates and later specimen books with the plates bound in. As early as 1859, a Dewey price list indicated 275 individual plates available for sale. He also began publishing plate books, such as the one shown below. 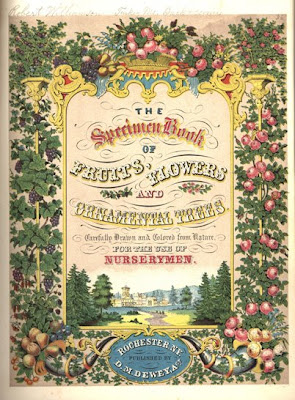 Another example can be found in the William Reese Company's inventory for $400, as of this writing. But Arader Galleries in New York may have the rarest and priciest book of Dewey's plates, with an asking price of $18,000.

By the late 1870s, Dewey had phased out his bookselling business, choosing to focus instead on the profitable chromo-lithographs of his publishing business. He employed some 30 artists and saw his inventory swell to between one-hundred and two-hundred thousand plates, which represented 2400 varieties of fruits, flowers, and shrubs.

Dewey made the decision in 1888 to merge his business with the Rochester Lithographing and Printing Company. He reasoned that the talent each party brought to the table would create the best plates ever. Less than a year later, Dewey died.

Karl Sanford Kabelac has written a very informative piece about Nineteenth-Century Rochester Fruit and Flower Plates for the University of Rochester Library Bulletin.