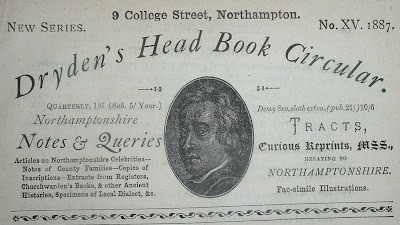 A few weeks ago, I headed east on I-10 out of Texas toward Florida for four days of baseball at various Spring Training camps. That was the main reason for the trip, but I created another agenda for myself, which would necessitate driving rather than flying: Book hunting through the Gulf Coast states.

I was on the prowl for anything interesting that caught my eye and particularly for books about books. I had hoped to also find some interesting book trade ephemera--not bookseller labels and bookplates, though I found many interesting examples of that. I was more interested in stand-alone pieces that were not adhered to the book itself. Pretty slim pickings for that stuff in the old book shops I found along the way. But I finally did uncover a nice piece at Farley's Old & Rare Books in Pensacola, Florida. 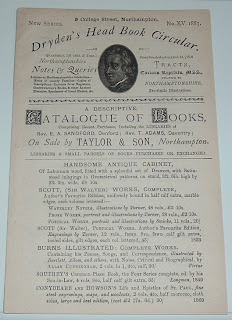 Here it is--an 1887 bookseller's catalog, a thin ten pages with a fat title:

This is advertised as a New Series, No. XV, 1887. Under the title of Dryden's Head Book Circular is more information, divided by what has to be an image of English literary icon John Dryden's head. There's a good bit of information packed into the masthead of this catalogue cover. To the left of Dryden's head, it appears that the bookseller is offering local histories for the Northampton area. To the right of Dryden, there is more Northampton material advertised in the form of Tracts, Curious Reprints, Mss., and Facsimile Illustrations.

Some research on the Taylor & Son firm reveals that John Taylor was also a writer and wrote a number of histories about the Northampton area. Some, if not all, were published by his Dryden Press. That would explain the ads on the front cover. So what of Taylor's homage to Dryden? 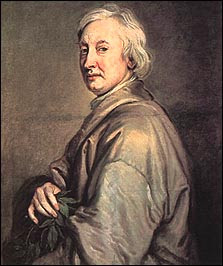 Dryden's legacy loomed large in the area, the celebrated poet having been born and raised close by in Aldwincle near Oundle in Northamptonshire. 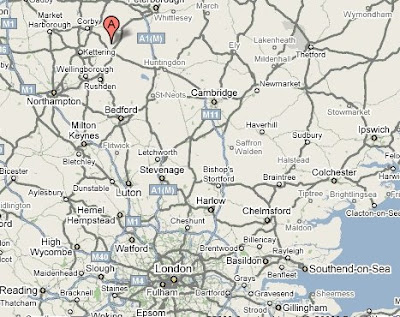 Aldwincle indicated by "A," Northampton is to southwest.
I don't quite understand the Dryden's Head part of the catalogue title. It appears to have something to do with a place or a building from the area's history. Perhaps it is more of a mascot for Taylor & Son.

Frits Knuf Antiquarian Books, in Vendome, France, has in their stock, as of this writing, a book published in 1732 titled Books Printed, and Sold by William Warner, at Dryden's Head, next to the Rose Tavern, without Temple-Bar, London, by William Warner. From that, it sounds to me like Dryden's Head was a location with a physical address, but that's about all I can find out about it. Maybe a reader out there can shed some light on this. I have found other examples of famous authors in England's literary history whose Heads have been lent to the name of a place. I'm curious about the story behind this naming convention. Anyone?

In researching all the clues offered in this piece, I tried the street address (9 College Street) and matched up right away with a book shop, but I was surprised that the book shop was Odyssey Books in South Hadley, Massachusetts, whom I 'm familiar with, having been a subscriber to their First Editions club. What an intriguing biblio-coincidence! Same street address as their English bookselling brethren from the 1800s.

The catalogue itself begins rather curiously with a listing for an antique cabinet, followed by antiquarian books for sale. The next page veers back to antiques with a listing of "Antique China, Etc." Books resume on the next page and the catalogue ends with "Illustrated Papers, Etc." and "Drawings and Engravings."

The Reverends E.A. Sandford of Denford and T. Adams of Daventry, whose libraries help comprise this catalogue, seem to have faded away into obscurity and have slipped under google's radar. Nary a word on them. But their books made it into a Northampton bookseller's catalogue more than 120 years ago. And that catalogue has traveled across the Atlantic to at least Florida and Texas and, now, wherever the Internet may take it around the world.