April 06, 2009
Here's a reprint of the first piece of ephemera to advertise what is quite possibly the first book published in Montana. 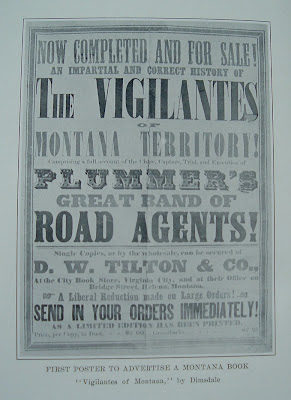 I acquired a book recently (pictured below), compiled by Al Noyes, that focuses on Thomas J. Dimsdale's 1865 book about the vigilantes in the Montana Territory who stamped out rampant crime that had terrorized the region for two years in the territory's infancy. 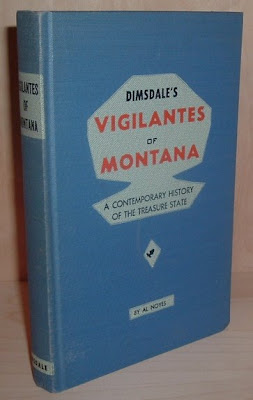 In reprinting the Dimsdale book, Noyes has also included an image of historical book trade ephemera (the poster above), which advertises Dimsdale's book, titled [take a deep breath…]:

The Vigilantes of Montana or Popular Justice in the Rocky Mountains, Being a correct and impartial narrative of the Chase, Trial, Capture and Execution of HENRY PLUMMER’S ROAD AGENT BAND, together with accounts of the Lives and Crimes of many of the Robbers and Desperadoes, the whole being interspersed with sketches of Life in the MINING CAMPS OF THE “FAR WEST.” 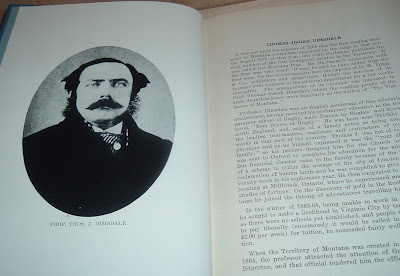 I had intended to crosspost this entry, with a lot more detail about the book's subject matter, on Archaeolibris, but I found a wonderful blog by anthropologist Kathleen A Dahl, in which she has already written about this book and its author, so I'll defer to her excellent post on the book's content.

Pick and Shovel is the title of her blog and within its pages she explores (though not lately) how the Old West has been portrayed and interpreted by the public and in the media. She has even included Dimsdale as a character in a serialized historical novel of her own. Seems like a clever nod toward Dimsdale, who initially serialized his vigilante account in a Montana newspaper. In 2006, Ms. Dahl wrote this about Dimsdale and his book.