May 28, 2009
The economy of late has drawn more than the occasional comparison to the Great Depression. And a once stalwart company such as General Motors is looking more like Government Motors these days. Against such a backdrop, I found (and had to add to my collection) a Great Depression-era print ad for a General Motors product--a 1934 Chevrolet Master Six Sedan. The kicker for me, and the reason for this post, is that Chevrolet used a bibliophile to represent its target audience for the ad. Most unusual, to say the least, and quite interesting to a bibliophile in tough economic times 75 years later. 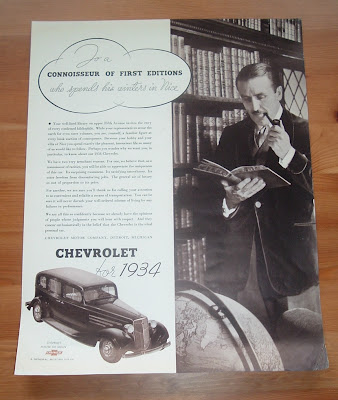 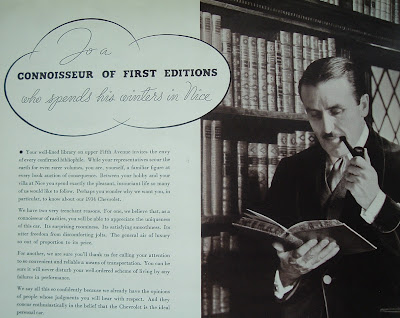 Chevrolet, along with other auto makers, was undoubtedly struggling in 1934--smack dab in the middle of the Great Depression. The ad campaign above decided to go after those who still had some disposable income and try to persuade them to lower their standards (my interpretation) and spend their money on a more economical model--the Chevrolet Master Six Sedan. 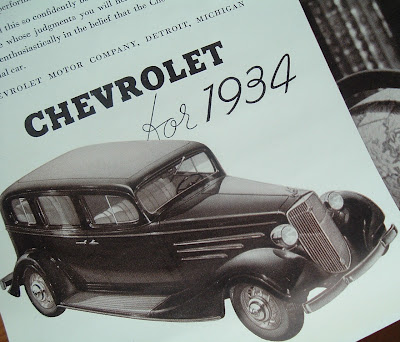 This bibliophile is no car connoisseur, but when I look at the picture of this vintage automobile, I see a cool-looking classic. I lump most old cars into that category. But in 1934, the Chevy Master Six Sedan may have been the equivalent of today's Chevy Malibu. An okay car, sure, but no self-respecting, wealthy bibliophile would be seen driving one, right? Especially one who winters in Nice, France!

Your well-lined library on upper Fifth Avenue invites the envy of every confirmed bibliophile. While your representatives scour the earth for even rarer volumes, you are, yourself, a familiar figure at every book auction of consequence. Between your hobby and your villa at Nice you spend exactly the pleasant, insouciant life so many of us would like to follow. Perhaps you wonder why we want you, in particular, to know about our 1934 Chevrolet.

There's more about the attributes of the new Chevy and the flimsy reasons why the super-rich might want to ditch the Rolls Royce and experience the ride of the common man.

But what an introduction for a car ad! I have no idea how effective the ad was, but it's a nice relic from the ad world of long ago. And maybe it was the first and only car ad to feature a bibliophile. And I'd bet it was also the first and last ad to use the word insouciant to sell a car!