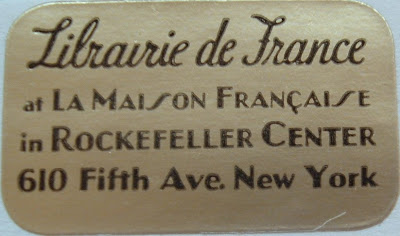 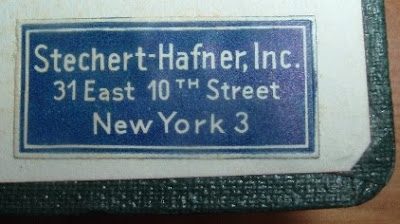 Cataloging books the other day, I struggled through a few non-English titles, trying to translate French and German to English to see what exactly I was dealing with. To my surprise, both had their bookseller labels still affixed. I hadn't come across any of these ephemeral bits of the book trade in a while and was getting complacent about even looking for them in more recently published books such as those harboring these labels.

The two New York City booksellers, represented here by their inconspicuous labels, were anything but inconspicuous as long-established bookselling concerns with specialties in foreign language titles.

The Librairie de France closed its doors just a few months ago. With rent tripling to about a million dollars a year, they just couldn't stay open in their Rockefeller Center space, where they'd been for 74 years. The picture below, from the New York Daily News, shows the store and its owner, Emanuel Molho, whose father started the business in 1928. 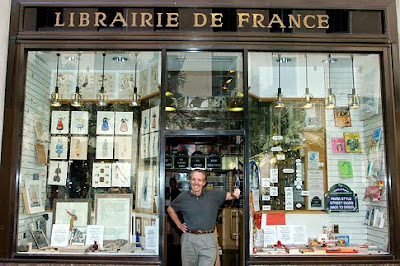 But a visit to their Web site offers some solace to customers with the announcement that they will continue operating as a mail order business.

Stechert-Hafner has a longer history than its former neighbor above and, surprisingly so, there is scant biographical information online about the principals of this company.

They got started in New York City in 1872 as G.E. Stechert & Company. Stechert was joined later by Swiss immigrant, Alfred Hafner, who worked in various positions for the company before his name became a part of the firm's name.

A 1966 obituary in the New York Times indicates that Otto Hafner was the president of the company at the time of his death. The company is described as having offices in London, Paris, Stuttgart, Germany, and Bogota, Colombia. A large international bookselling firm, they imported and exported books in many parts of the world.

Countless references can be found on the science, technical, medical, and other nonfiction categories, in which Stechert-Hafner dealt, in languages from around the world.

Nine stories of inventory at their New York location were purchased by Richard Booth and moved to his Hay on Wye bookstore, a former castle. The date of the purchase is not indicated in the article at the link above, but Booth started his bookshop in the early 1960s. Perhaps with Hafner's death, the company's beginning of the end was at hand.