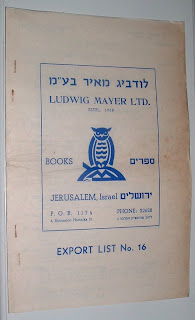 I recently acquired a box of bookseller catalogs from around the world and found one from Jerusalem that ties in with another piece of ephemera from Israel acquired in a separate lot.

The bookseller's catalog is from Ludwig Mayer of Jerusalem. The catalog is titled Export List No. 16. Its size caught my eye first, the unusual dimensions of 8.5 by 13 inches. All titles advertised are for Hebrew language books unless indicated otherwise, but the listings in this catalog are described in English.

The book shop that Mayer started in 1908 still exists and has been in the same location since 1935. According to the shop's Web site, Mayer Books (Jerusalem) Ltd (its full name today) is the oldest book shop in Jerusalem. Their specialty is in academic publications with a special attention to the humanities. They stock books in Hebrew, English, German, and French.

The second piece, from about the same period, is a 1965 postal cover advertising the Jerusalem International Book Fair. 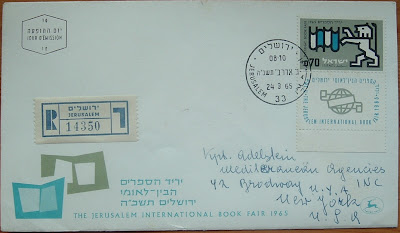 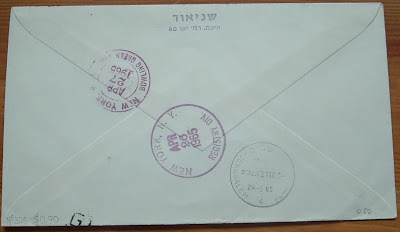 One of the largest in the world, the book fair started in 1963 and is held biennially. This 1965 cover advertises only the second occurrence of the book fair. As stated on their Web site (link above), the fair draws over 1200 publishers from more that 40 countries who display more than 100,000 books in different languages.

A key event at each fair is the awarding of the coveted Jerusalem Prize, to a writer "whose work best expresses and promotes the idea of the freedom of the individual in society." Five writers who have received this award have also received the Nobel Prize for Literature.

The 24th Jerusalem International Book Fair was held earlier this year and the 2009 recipient of the Jerusalem Prize is Haruki Murakami.