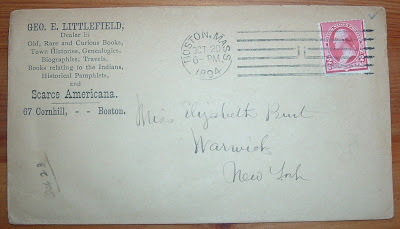 Here is an ad cover from 1894 advertising the business of rare book dealer George Emery Littlefield of Boston. Littlefield lived from 1844 to 1915 and, in addition to selling rare books, he published many catalogues of rare Americana and genealogy. He also published in 1900 a volume of bookseller history, Early Booksellers of Boston 1642-1711. There is surprisingly little else on Littlefield that turns up on the Internet, especially considering that two book were written about him, neither of which I can find: An Old Boston Bookseller: George E. Littlefield as I Knew Him, by Frank Jones Wilder and George Emery Littlefield, A.B., by John Woodbury. 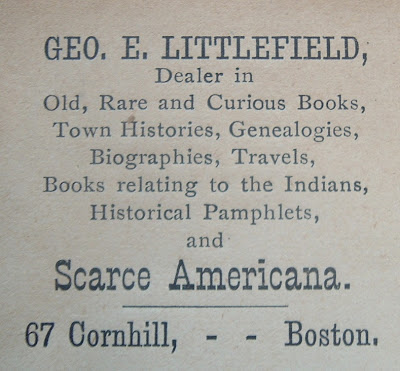 My relations with the Boston booksellers were from the start, as they always have been, most cordial. Prominent among them was George E. Littlefield, at the time dean of the Boston secondhand booktrade. Mr. Littlefield was a Harvard graduate and had a decide bent toward historical research. He specialized in Americana, particularly in genealogy. I found him a good friend, always most helpful... Cornhill, a short street descending the lower slope of Beacon Hill easterly from Scollay Square, was at the time of which I write, even as it is now, distinguished by the old book shops on either side. The aspect of Littlefield's establishment at No. 67 was rather unattractive. Its walls were lined by shelves built to the ceiling. These and a central stack contained a miscellaneous lot of books in which the proprietor appeared to take little interest. His desk, surrounded by rows of Americana and buttressed by dusty piles of pamphlets, was on a raised platform in the rear. Here he sat and wrote or entertained his cronies who, although not numerous, included mot of the Boston collectors of the time. He was brusque in manner and intolerant of casual visitors. 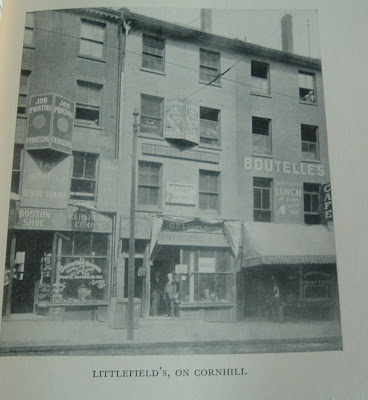 Littlefield's shop on Cornhill. Perhaps that is him standing in the doorway with a customer or employee. 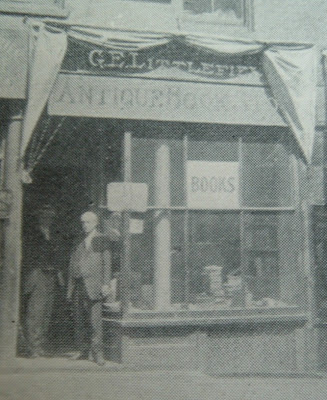