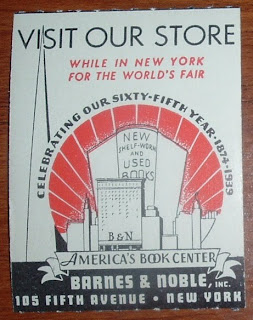 The World's Fair was in New York, 1939-1940, and there were probably many companies who used that event in their advertising ephemera. Barnes & Noble was no exception.

Here is a piece of ephemera that appears to have been part of a World's Fair souvenir booklet of some sort. Perforated edges and a gummed back indicate it was part of a set of stamps. Thankfully, this little item survived the separation that usually damages such items.

It measures 1.5 by 2 inches. Printed on this stamp is VISIT OUR STORE in large type. In smaller type below, almost as an afterthought, is the rest of the message... While in New York for the World's Fair.

Barnes & Noble already had a long history in New York by 1939. The bookseller with the slogan, America's Book Center, had its genesis in two different cities, actually, with different family booksellers. But the two families did not merge their businesses as the name might imply.

The Barnes family bookselling business originated in Wheaton, Illinois in 1873 and by 1894 was selling only school books. By 1917, William Barnes, son of the founder, sold his interest and moved to New York, where he acquired an interest in an established educational bookselling firm, Noble & Noble. He partnered with G. Clifford Noble, who had been in the book business with two partnerships previously--Hinds & Noble and Noble & Noble. After Barnes joined the latter, the bookstore was soon renamed to Barnes & Noble.

This partnership lasted until 1929, when Noble left, but the name stayed. Barnes & Noble's name recognition by that time must have been too significant to toy with. The Barnes family kept control of the company until 1969, when John Barnes died and it passed into other hands.