October 29, 2009
A while back I wrote about a piece of advertising ephemera that used a bibliophile angle to sell a new 1934 Chevy: Advertising with bibliophiles. Below are more examples of Madison Avenue having tapped into the biblio vat for just the right image to sell a product. It's whisky rather than wheels this time. 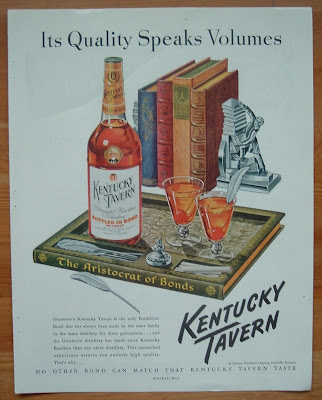 Kentucky Tavern evidently has a certain quality comparable to rare volumes of books. Either that or its quality is quantifiable by a metric consisting of many books.

That's about it for this ad--the books are more or less a cheap prop. Plus, it looks like the two drinks are Manhattans (cherries being the clue). Any bibliophile worth his bitters could tell you that straight rye is the preferred elixir for that cocktail (even though I fudge a bit with Maker's Mark).

Hudson's Bay Blended Scotch Whisky, on the other hand, used in this next ad a set of what appears to be very old and valuable books and a clever play on words with the line, The spirit that's in these books... is in this bottle. 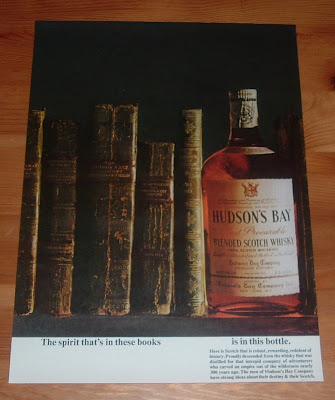 The antiquarian books are about the Hudson's Bay Company and the adventurous exploits of its men in the New World. Further, Hudson's Bay Blended Scotch Whisky makes the claim that it "descended from the whisky that was distilled for that intrepid company of adventurers who carved an empire out of a wilderness 300 years ago."

I don't know how you would substantiate that claim, but, personally, I think rare books of the Hudson's Bay vintage match up better with a single malt Scotch, not a blend.

Regardless, anytime I can find interesting ephemera, such as these ads, that use books to pitch the quality of a product, I'll... well, I'll drink to that!