A Civil War veteran's letter to a bookseller

October 31, 2009
This is about a letter about a book. A very important book to the letter writer.
A few years ago, I purchased a letter written in 1922 by an old Civil War soldier--a veteran of the Confederacy living in Austin, Texas at the Home for Confederate Veterans. The envelope bears the Confederate insignia flag and address of the home. The letter was addressed to a Mr. J.J. Wolfe of Houston, whom I have presumed to be a bookseller. 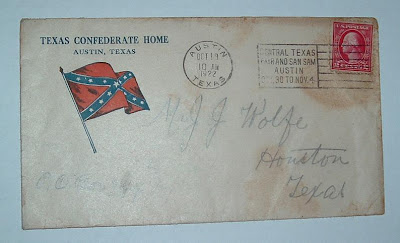 I wrote about this in another blog a few years back and now it seems more fitting that it be posted here, especially if my assumption about Wolfe's occupation is right. For the sake of this post, let's say I'm correct and Wolfe was a Houston bookseller in the 1920s. But even if I'm not correct, the letter is still about a book. So either way, we have a bibliophemera connection.
The writer of the letter--the old Rebel vet--thought Mr. Wolfe might be able to help him momentarily escape his "prison" (he states he is an "inmate of the Home") and "rent" him a book about his homeland--Davidson County, Tennessee. It's a poignant letter from an old man at the end of his life, who appears to want to see his boyhood home one more time, if only through the pages of a book. 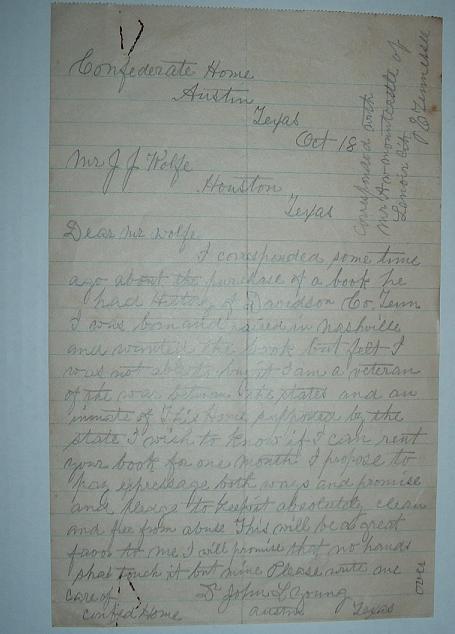 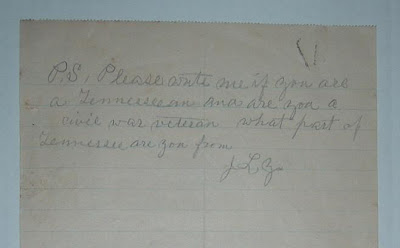 John L. Young is the Confederate veteran. His brief bio is found here at the Texas State Cemetery site. From it, we learn Mr. Young's age, 84, at the time he wrote the letter. We also learn that he was from Nashville and that he was listed as a deserter during the Civil War. Apparently, he signed up for 12 months and was taken prisoner, but was released after he'd been in service for 12 months, so he decided he'd had enough. Assuming his obligation was over, and presumably having no more use for the war, he tried to get on with his life.

He's unaccounted for between 1862 and 1877. Maybe he was on the run. But he showed up in Texas about 1878 and worked as a farmer, presumably until he went to the Confederate Home. He signed his name Dr. John L. Young, but it's unclear why he did so. By all accounts he was a farmer, but he did board with two doctors late in life, until he went into the "Home." Perhaps Dr. became a sort of nickname or maybe he thought it give him more credibility in a world where he might not have had very much status.

His life long ago shaped by the events of the War Between the States, Young still seemed to retain a nostalgic sense of place for his boyhood years in Tennessee. By the time he finds himself in the Confederate Home in Austin, Texas, and writing this letter as an old man, his financial situation is pretty dire and he could not afford a copy of the Davidson County book from another correspondent--a Mr. A.W. Mountcastle of Lenoir City, Tennessee. I don't know if Mountcastle was a bookseller, but he was a friend to all Confederate veterans according to his profile on this Tennessee genealogy site.

Undeterred by his poor financial circumstances, Young hatches a creative scheme whereby he can still obtain a copy of the book. He must really want to see it. His words, from the letter above, follow (I've added only punctuation for legibility):

I corresponded some time ago about the purchase of a book he [Mountcastle in Lenoir City, TN] had History of Davidson Co Tenn. I was born and raised in Nashville and wanted the book but felt I was not able to buy it. I am a veteran of the war between the states and an inmate of This Home supported by the state.

I wish to know if I can rent your book for one month. I propose to pay expressage both ways and promise and pledge to keep it absolutely clean and free from abuse. This will be a great favor to me. I will promise that no hands shall touch it but mine. Please write me in care of Confed Home.

P.S. Please write me if you are a Tennesseean and are you a civil war veteran? What part of Tennessee are you from?

Every time I read this letter, I wonder how Mr. Wolfe in Houston responded to the old man. Or did he bother to respond at all? Did Mr. Young get to read about his old homeland and see images that would enhance time travel back home through his aging memories?

What would a bookseller today do with such a request? Unless it was a collectible book of great value, I'm pretty sure I would send the old man the book with my compliments and tell him to enjoy it.
As for the book Mr. Young wanted, I searched books with Davidson County in the title, published prior to the letter's postmark of 1922, and found only one match: History of Davidson County, Tennessee, with Illustrations and Biographical Sketches of its Prominent Men and Pioneers, by W.W. Clayton (Philadelphia, 1880).

Not long after purchasing that letter, I purchased a musty old book at an antique store in a small Texas town (Wallis): Civics: Texas and Federal, by Triplett and Hauslein; Rein & Sons (Houston, 1912). I bought it for an old document left between the pages long ago. It had more value to me than the neglected book that had archived it all these years. I had just about tossed it into the donation pile when I decided to thumb through its pages for any interesting old photographs. I was rewarded for my efforts. Many historical images from around the state of Texas began to appear, but one in particular caught my eye--the Home for Confederate Veterans in Austin, John L. Young's "prison" in his final years. And it does look kind of like a prison! 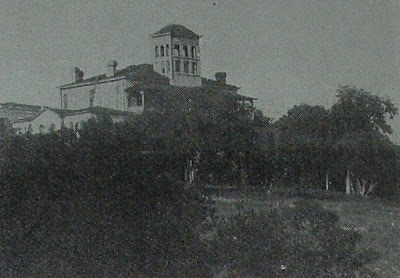