November 27, 2009
In 1880, the revered American poet and scholar, Henry Wadsworth Longfellow (1807-1882), bought a book printed in Pennsylvania German from H.L. Fisher, a York, Pennsylvania lawyer and poet. Fisher evidently self-published the book and had pre-printed receipts ready for the sales.

I have in my collection the receipt he made out to Henry W. Longfellow for his purchase of a copy of 'S Alt Marik-Haus Mittes In D'r Schtadt, Un Die Alte Zeite, a centennial poem in Pennsylvania Dutch. 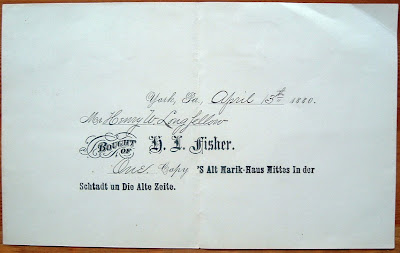 So what interest did Longfellow have in some obscure German language book from a Pennsylvania lawyer who liked to write? That was one question I had when trying to determine if this were really the same Longfellow (how many Henry W's could there be?).

I don't know of any specific interest in Fisher. That may be forever lost to history. But in researching Longfellow and Fisher and related people, places, and events, I discovered a bigger picture about Longfellow and his collecting and scholarly pursuits that puts his Pennyslvania German acquisition into a better perspective.

Longfellow's ability in the ancient classics, while studying at Bowdoin College in the 1820s, led the trustees to establish a new chair of Modern Languages and offer the position to Longfellow. But first, he was instructed to study in Europe to prepare himself in the langauge and culture of France, Spain, and Italy.

Before setting sail, he met with George Ticknor in Boston. Ticknor's strong recommendation that the young graduate include Germany in his itinerary sowed the seeds of Longfellow's lifelong interest in Germany and its literature.

Longfellow returned after a few years to Bowdoin College to teach and later was offered a similar position at Harvard on the condition that he travel again to Europe, at his own expense, and attain more expertise in the German language.

His love and scholarly pursuits of German were lifelong and just a few years before his death, the receipt above indicates that he was still reading and studying German. I don't know the extent of his interest in Pennsylvania German or if it were something he aspired to late in life. But he knew enough to select a title from Fisher, "whose admirable contributions to Pennsylvania-German literature easily place him among the most gifted and fertile writers in the dialect." That attribute to Fisher is from a 1902 Pennsylvania-German Society publication article, Metrical Translations from the German and English Classics and from the Irish and Scotch Dialects into Pennsylvania German, by Thomas C. Zimmerman.

I consulted two biographies of Longfellow to learn more about him and attempt to find any connection he had to Pennsylvania German literature: New Light on Longfellow, with Special Reference to His Relations to Germany, by James Taft Hatfield (Houghton Mifflin, 1933) and Longfellow: A Rediscovered Life, by Charles Calhoun (Beacon Press, 2004).

I wound up reading both and recommend them, as well as Harvard's Houghton Library site, Public Poet, Private Man: Henry Wadsworth Longfellow at 200 for anyone interested in his life. There's a lot more to the man than Hiawatha and other anthologized relics from an immense, albeit faded (in popularity), American literary legacy.