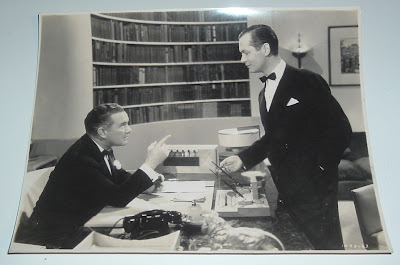 This recent addition to my collection is a publicity photo from the 1939 movie, Fast and Loose, a B movie at best that depicts a rare bookseller and his wife sleuthing around a crime scene involving a murdered bookseller and rare books theft. This particular photo was actually run in an Argentine newspaper, but I'd bet the same photo was used anywhere the film needed promotion. And from reviews I've read, it needed a lot of promotion.

The film Fast and Loose was the second in a series of three films inspired by the book Fast Company, by Harry Kurnitz (Dodd, Mead, 1938). My copy below is a second printing of the first Pocket Books edition in 1943. Marco Page was the pseudonym Kurnitz used. 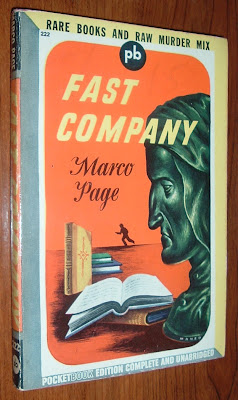 Both the book and film have slipped into obscurity. I can't find a copy of the film anywhere to buy or rent, but if you'd like a first edition of Fast Company, which spawned the film series, there are actually a few copies to be had. But be prepared to spend around $500 and up. Apparently, the original book is at least valuable to collectors of biblio mysteries.

Interestingly, each film in this series had a different pair of actors in the lead roles of Joel and Garda Sloane (Glass in the book). The first film in the series took the book's title and starred Melvyn Douglas and Florence Rice in 1938. Two follow-ups were made in 1939, with Kurnitz writing the screenplays. In addition to Fast and Loose, which starred Robert Montgomery (pictured in the publicity photo) and Rosalind Russell, the finale in this trio was titled Fast and Furious, with Franchot Tone and Ann Sothern as Joel and Garda.

FYI... Robert Montgomery, who is pictured on the right in the publicity photo, was the father of Elizabeth Montgomery, best remembered for her role as Samantha Stevens in the 1960s sitcom Bewitched.

For more information on Kurnitz, his book Fast Company, and the Fast film series, MysteryFile.com is an excellent resource as well as this Turner Classic Movies site.

Here is the original trailer for Fast and Loose, which includes the scene that generated the still shot for my publicity photo:

There are trailers for the other two installments of this series, but I thought it best to not get too fast and loose with embedding YouTube videos in this post. If anyone really wants more punishment, you can find it.