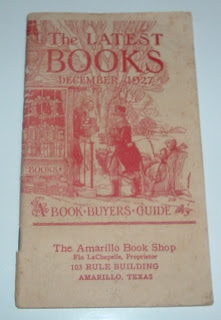 Just in time for Christmas, the Amarillo Book Shop catalog showed up in my mailbox today. But unless I can time-travel, I won't be getting what I'd like to have out of this catalog for Christmas Day.

This catalog is from 1927 and features Ernest Hemingway's latest collection of short stories, Men Without Women, for $2.00. Back here in 2009, that same book in as fine condition as the Amarillo Book Shop had it would be in the neighborhood of $10,000. That's a nice neighborhood!

Page 8 offers a related vignette and refers the reader to page 16 to see the listing for the book. 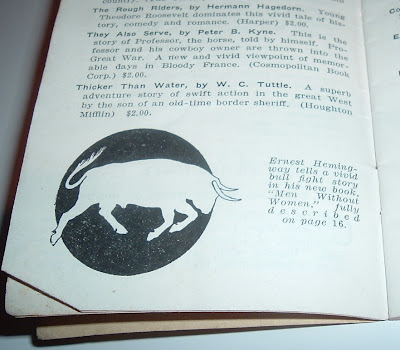 I like looking through these old book shop catalogs to see what was for sale and for how much. But what first caught my eye was the cover graphic, an illustration in red depicting a winter (Christmas) book shop scene, complete with a one-horse open sleigh. The illustrator is not credited other than by the initials M.D. 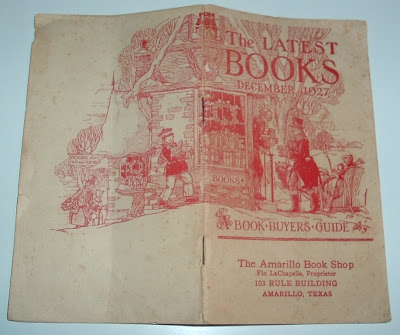 My ephemera collection includes prints and various formats of illustrations, such as this now, which depict old book shops and the bookselling trade. I am unfamiliar with this one, but I would like to know anything about this drawing and the artist. M.D. could be a local artist in the Amarillo area or this could be a reproduction from a book or other source. For now, it remains a mystery. 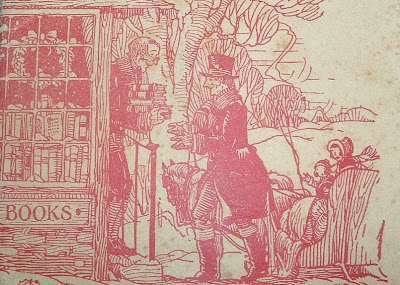 The history of the Amarillo Book Shop also remains a mystery. The details I have from the catalog's cover include the business name, the proprietor's name (Flo LaChapelle) and the location (103 Rule Building). The only history I can glean from the Internet so far is that the Rule Building was built in 1927, the same year indicated on the book shop's catalog.

So I wonder if the book shop got its start in a new building or if it had existed prior to the Rule Building opening its doors.

Either way, the stock market crash of 1929 was a just a few years ahead and would signal the beginning of the Great Depression. In the decade of difficult times that followed, I also wonder just how long the Amarillo Book Shop was able to make a go of it.

From the looks of this little catalog, they were well-stocked with a variety of books and probably feeling optimistic about their home in a brand new building. However long that lasted, they appear to have vanished without a trace, save for their December catalog of 1927.