Focusing on a particular state, such as Texas, collectors and sellers of books about the Lone Star State, such as myself, deal in Texana.

It’s easy to classify your geographic collection or interests with the ana suffix, where it fits and sounds okay. Sometimes you need another vowel to help with the transition, such as the letter i. Floridana doesn’t work for Florida, but Floridiana (accent second syllable) gets the job done.

If you collect Louisiana, well…

What about Delaware? I found the answer (wasn’t looking) in the ex libris below: 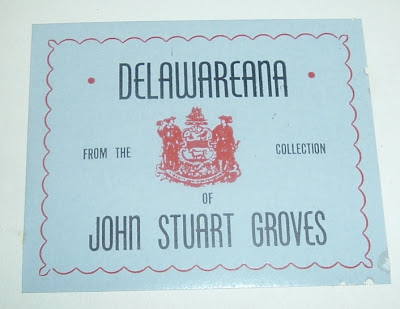 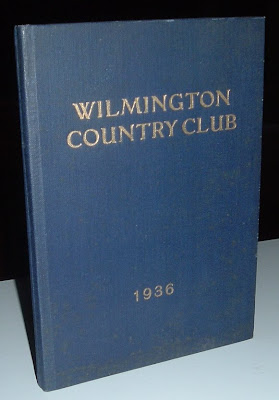 A quick Internet search of Groves' name turns up a handful of books for sale that bear the same Delawareana bookplate as above, but surprisingly little information on the collector.

John Stuart Groves was obviously a collector of Delaware history, but he also collected Lincolniana (there's that i transition again) and helped supplement the collection of the Lincoln Club of Delaware, which was donated to the University of Delaware Library in 1972.

I also found Grove's name in the Wilmington Country Club book, listed as one of two Chairmen of the Members Committee in 1936.

As for his books, it would appear that they have been scattered hither and yon. I would have liked to have discovered his collection, or the majority of it, intact, residing in a Delaware library, as did his Lincoln collection. Perhaps it wasn't big enough or important enough a collection for a library's holdings. But it appears to have been an interesting and special enough collection to Groves, warranting a custom bookplate.

So today where would Groves or any collector of books about Delaware go to find them? Start online with the Collecting Delaware Books site, a digital collection of print newsletters discussing Delaware books and paper ephemera, published from 1992 to 1999 by John P. Reid of Bear, Delaware.

Wrapping up, here's a quick American history lesson: Delaware is known by the nickname, the First State because it was the first state to ratify the U.S. Constitution in 1787. Thus, Delaware became the first state in the newly formed United States of America. I'll bet John Stuart Groves had some interesting material on that!