A Letter from Frank James 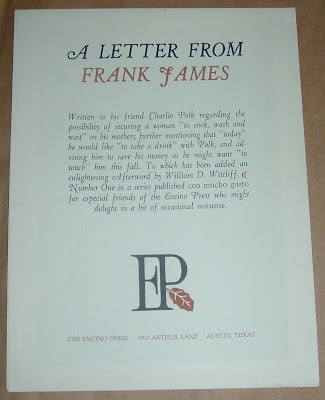 Back to my small collection of William D. Wittliff ephemera (started with this post), here is a piece published by Wittliff's Encino Press in 1966. It's a four-page brochure, for lack of a better description, that presents a two-page letter written by Frank James, brother of the infamous outlaw, Jesse James.

Most everyone has at least heard of Jesse James. Frank was Jesse's older brother. Together, and with other members of their gang, they robbed banks, stage coaches, and murdered. After Jesse was murdered himself, Frank turned himself in and was acquitted at a trial for murder. He went straight afterward, working in a variety of jobs, including shoe salesman, ticket taker at a theater, and telegraph operator. He later made money off his criminal past with lectures and tours of his farm that included the grave of Jesse James, who had become a legendary figure of the Wild West after his death.

The most interesting thing I read about Frank James came from the Wikipedia page on him:

As a child, James showed interest in his late father's sizable library, especially the works of William Shakespeare. Census records show that James attended school regularly, and he reportedly wanted to become a teacher.

The Civil War tore apart the state of Missouri, where the Jameses lived. The brothers were swept up into guerilla warfare and involved in several atrocities under the guise of war. After the war ended, their way of life continued with gangs and crime.

Had the Civil War been averted, and relative peace continued in Missouri, I wonder what influence that library of Shakespeare volumes might have had on a young Frank James? The war, of course, didn't excuse the actions of Frank and Jesse James. Plenty of others in the state were caught up in similar circumstances and did not resort to the lifestyle adopted by the James brothers. Interesting to ponder, though.

The letter that Bill Wittliff printed is a letter from Frank James to a friend, Charlie Polk, seeking domestic help for his mother. 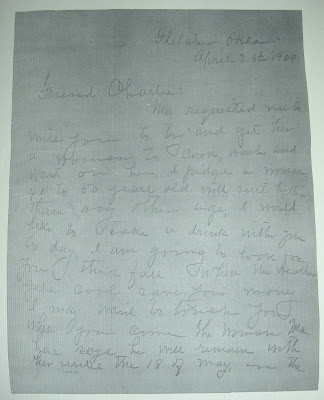 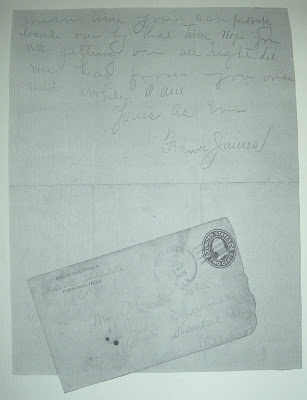 I'm not sure where the letter came from or how Wittliff obtained it, but he decided to have some fun with the printed piece of ephemera. After a description of the letter on the front cover, Wittliff continues:

To which has been added an enlightening Afterword by William D. Wittliff.

Number One in a series published con mucho gusto for especial friends of the Encino Press who might delight in a bit of occasional nonsense.

With that, I have to wonder if the letter is even real--it certainly appears so. Flipping the piece over to read the "enlightening Afterword," there is this from Wittliff:

You see, he weren't all bad.

That's it, except for a handwriiten note Wittliff added for the orginal recipient of this piece: 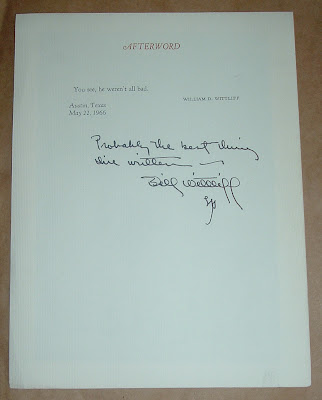 According to WorldCat.org, only three copies of this printed letter exist in library holdings, all universities in Texas: Texas A&M (College Station), University of Texas (Austin), and Baylor (Waco). WorldCat also describes the format of this piece as "Book," which it clearly is not by most definitions of a book. Whatever you want to call it, it appears to have had a limited printing and distribution. I've got number four. Any others out there?