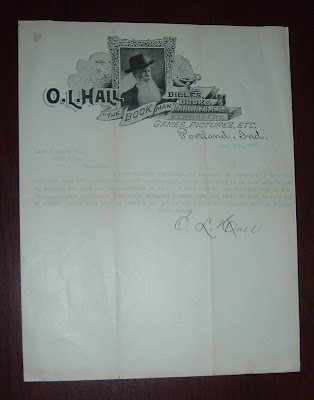 Here's a letter from an Indiana bookseller in 1907, more notable for its letterhead than anything else I can find about its author. In addition to books and Bibles, The Book Man sold magazines and stationery along with games, pictures, and miscellaneous items. 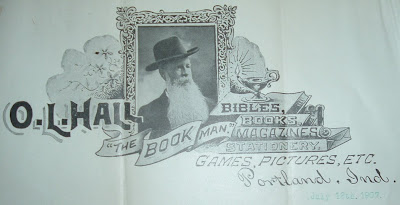 O.L. Hall, who billed himself as "The Book Man," typed this out, perhaps from his book shop, one summer day more than a hundred years ago in Portland, Indiana. His Walt Whitmanesque pose (Whitman below) makes for an impressive centerpiece in his letterhead. 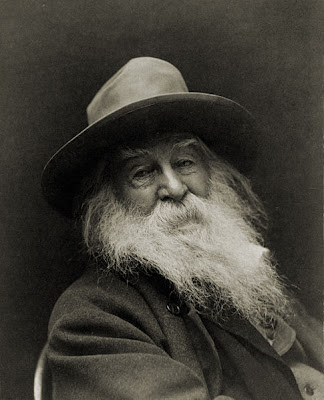 Mr. Hall's tone in this letter to the Liss Mapping Co., in Lima, Ohio, shows his patience is wearing thin with the mapmakers a few counties over in the next state. He's not about to let unanswered letters and a little detail about Liss having gone out of business deter him from getting what he wants. He stubbornly makes another request in one long, rambling sentence:

I have written you twice, and received no answer and I have been informed that the business has been discontinued, but it does seem to me that someone gets my letters for none has been returned to me, and I want some of the Township Maps of this County, Jay, and would like these right away, and I think some one would be glad to make them, so kindly answer this stating where I can get some orders filled promptly, and graetly (sic) oblige.

I doubt he ever got his maps from the defunct company, but I'll give him a few points for stubborn persistence.