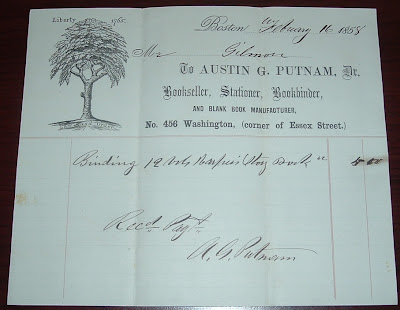 Austin G. Putnam was a bookseller, stationer, and bookbinder, as well as a manufacturer of blank books, according to this 1858 billhead. He practiced his trade at 456 Washington (corner of Essex), in Boston. 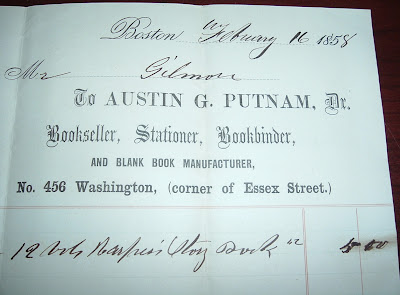 I had hoped to make a connection to the G.P. Putnam & Sons publishing family that got started in New York in 1838 as a bookselling concern, but no luck yet. There may not be any connection, or it may be very distant. So far as I know, there are no close ties between the two Putnams.

As for Austin G. Putnam, he's proving to be an elusive historical figure, but a snapshot of his business history is contained in this billhead from February 16, 1858. On this day, he completed his transaction with Mr. Gilmore for binding what looks like a 12-volume set of a story book. I can't make out the first word in the title. It looks like he charged $4.00 for that good bit of work. Twelve volumes had to have taken some time.

What I did find was a symbol of significant American history at the origins of the country's rebellious stand for independence. The striking feature of this billhead is Putnam's choice for a logo--the tree with "Law and Order" across the roots and "Liberty 1765" across the top. What does all that mean? 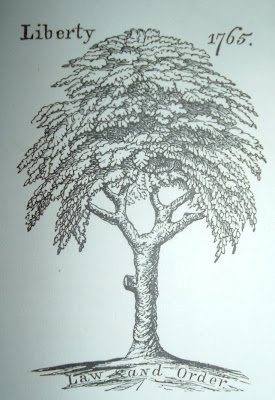 Less than a hundred years prior to the date of this billhead, the British Crown sought to raise revenue to cover its rising debt and the cost of maintaining troops in the Colonies. The Stamp Act of 1765 was a means of doing so. The act required the purchase of a tax stamp for transactions involving all printed matter, from newspapers to legal documents and bills of lading for shipping.

The reaction of the colonists, to say the least, was not very favorable. The opposition movement adopted the name Sons of Liberty and united social classes across the colonies. The Boston chapter, led by Samuel Adams, is said to have had its meetings under the Liberty Tree, which is represented by the illustration on the Putnam billhead.

So Liberty and 1765 become obvious with their connection to the Stamp Act of 1765. The words "Law and Order" beneath the tree possibly signify the need for restraint from mob violence during protest. That line was crossed at times by members of the Sons of Liberty with rioting, looting, and other acts of violence, including destruction of personal property and the ransacking of the Massachusetts Governor's house (Thomas Hutchinson).

The old elm tree in Boston Commons, which was the Liberty Tree, was cut down by British soldiers occupying Boston on the eve of the American Revolution. Could that be the sawed-off limb on the left side of the trunk in the illustration? I thought that a curious detail to include in the graphic until I read about the tree being chopped down.

I also wondered why Putnam would use a symbol from the American Revolution era for his business in 1858. Perhaps his book shop was located near where the Liberty Tree stood. I thought also about his genealogy, that maybe there was some proud heritage dating back to those times. There is no shortage of Putnam names for leadership during the Revolutionary War--General Israel Putnam and General Rufus Putnam are the most prominent. Could one or both have been related to the bookbinder of this 1858 billhead? Could one have been a grandfather or great-grandfather?

Whatever the reason for using the Liberty Tree on his company paper, Austin G. Putnam felt strongly enough about it to identify his business with it and incorporate it into his correspondence.

Ironically, another stamp tax act, the Revenue Act of 1862 was enacted by the U.S. government a few years after the date of this billhead, which required tax stamps on, among other things, various paper items. Revenue was needed to help finance the Civil War. See my post on a related piece of ephemera.