A nice, second-hand bookstore find three years go introduced me to a passionate bookman and popular Dartmouth professor of literature: Herbert Faulkner West. I wrote about it then on the Archaeolibris blog (pre-Bibliophemera), and have modified that piece for its fitting inclusion on this blog.

The book I found is SUNNY INTERVALS: A Bookman's Miscellanea, London / San Francisco / Hanover, by Herbert Faulkner West (Westholm Publications, 1972), signed and numbered by the author in a limited edition of 400 copies. 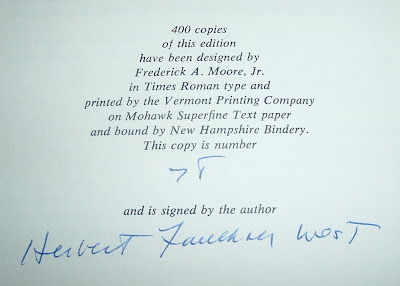 A serendipitous find, this book also had several pieces of ephemera laid in years ago by the previous owner (to whom I am very grateful!). Among the small cache of paper was a letter from the author, as well as correspondence from the book's previous owner, relating items about the author. There were several newspaper articles about West's death (1974) and long career in education as well as a thank you note from the Howe Library in Hanover, New Hampshire, regarding a contribution in West's memory to buy books. Very fitting. 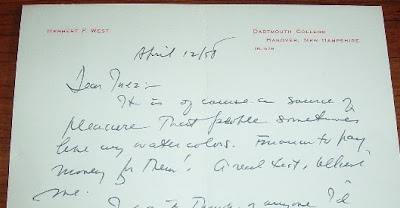 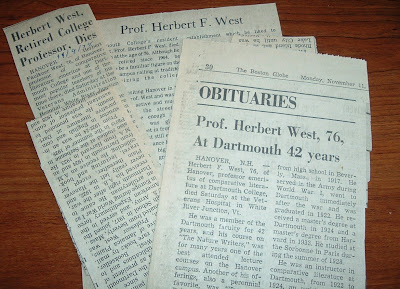 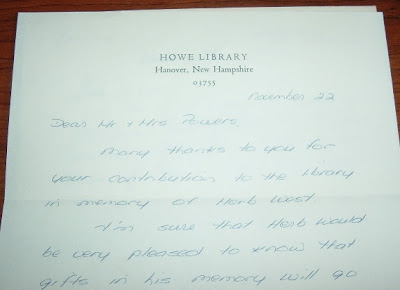 I feel fortunate to have discovered him through this book, and am indebted to the kind stewards at the used bookshop for keeping intact the associated ephemera from a previous owner connected to Mr. West.

As for the textual content of this book, West's book buying trips to the cities comprising the title of this book are full of detail regarding his purchases and from whom he purchased the books. That information provides interesting insight to the values and provenance of certain books and authors he collected, such as Robert Frost, W.H. Hudson, T.E. Lawrence, T.S. Eliot, and William Butler Yeats.

The first chapter may explain finding this copy of the book in a Texas bookshop. The book begins with a 1964 trip to Texas, where West meets with J. Frank Dobie in Austin. Dobie is legendary in Texas and he and West seemed to have had a friendship. Mr. West finds Dobie in ill health, but still getting around.

Subsequent chapters detail various book buying trips West took to California and London. One chapter that details a book buying expedition to London shares its title with the book's title.

West never fails to mention dealers and their stock and exactly what he bought. Often times he mentions what he paid for a collectible book, giving collectors and dealers alike an idea of how much certain books have appreciated over the years. For example: The Story of the Malakand Field Force, by Winston Churchill (1898) cost West $125 during a California buying trip in the 1960s. Today, for a nice first edition of that book, he could expect to pay between $3,000 and $4,000. Another purchase, James Joyce's first book, Chamber Music (immaculate condition) set him back $182. Today, that book would quickly run up into the thousands, possibly as much as $10,000.

Regarding booksellers, West knew quite a few of the prominent ones in both America and England. Collectors and sellers alike, if they've been at it long enough, have undoubtedly heard of Serendipity Books in Berkeley, California. West recounts a 1968 visit with Peter Howard, the owner, shortly after he had opened Serendipity. West prophetically proclaims, "I think he has quite a future as a bookseller."

West was also friends with various writers, including poet Robert Frost and novelist Henry Miller. Much of his collection of Henry Miller works and correspondence with the author is now in the Dartmouth College Library. Of Miller, West has been credited with having written the first review of him in America. And that review is reproduced here in Sunny Intervals. (See my Henry Miller ephemera here.)

For those who enjoy a vicarious trip among the continents in search of rare books, Sunny Intervals offers an appropriate vehicle.