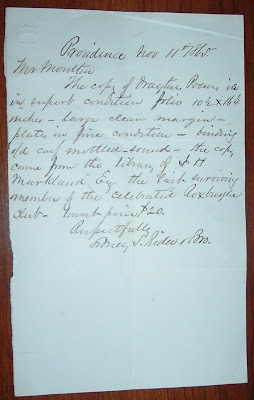 On the surface, it looks like a short note from a bookseller to a prospective customer. But lurking among the few lines in reply to an inquiry is a good bit of history for the bibliophile.

Rider wrote to a Mr. Moulton in reply to Moulton's inquiry about a book of "Drayton's Poems." Good bookseller and stickler for details (if not punctuation) that he was, Rider provided a careful description of the book:

This brief response offers clues for the curious bibliophile to research, which is exactly what I did.

First, I learned about a bookseller I'd not heard of before. That in and of itself is no big deal. Thousands upon thousands of booksellers of all stripes have come before and relatively few stand out among the rest as memorable. Rider may not make the cut for most, but he is worth knowing about, especially if you have an interest in Rhode Island history.

Searching the Internet for information about Rider, I found a book I'm going to have to buy for my reference library. The Dictionary of Antiquarian Bookdealers offered a good bit of information on the bookseller, Sidney S. Rider. He was more than a bookseller, though. He was an antiquarian, author, and publisher.

His introduction to bookselling came at an early age when he began work as a boy with Charles Burnett at his book shop on Westminster Street in Providence. He later succeeded Burnett and took over the business after Burnett's death.

Rider paid particular attention to stocking the finest editions of English literature and he expected his customers, when they made inquiries, to heed his directives on what to purchase. He may have expected Mr. Moulton to purchase the book of Drayton's poems, though he was merely describing the book rather than recommending it in this correspondence.

In the 1860s, after the Civil War, Rider began publishing pamphlets on Rhode Island history, a venture he would continue for the next 40 years. He extended his publishing to other areas of interest, most notably his popular Book Notes, from 1883-1916. Book Notes dealt with Rider's opinions about books and history as they related to Rhode Island. Also in the late 1860s, Rider began a publication he called Bibliomaniac, which dealt with literature and the fine arts. At the time of this letter, these publications had yet to see print.

During his life and career as a bookseller, he amassed a collection of some 50,000 items pertaining to Rhode Island history. This collection was purchased by a prominent collector and customer of Rider's, Marsden Perry of Providence. Perry presented the collection to Brown University, where it resides today in The History of Special Collections at Brown University

Stepping away from Rider, what about the book that is the subject of this letter--Drayton's Poems? That would be Elizabethan poet, Michael Drayton (1563-1631). The preceding link is for an interesting and beautifully designed site called Luminarium, which is worth a visit for fans of English literature from Medieval times through the Restoration.

Drayton was a contemporary of Shakespeare and friends with the more famous writers of the day according to this passage from the Wikipedia entry on Drayton:

Drayton was a friend of some of the most famous men of the age. He corresponded familiarly with Drummond; Ben Jonson, William Browne, George Wither and others were among his friends. There is a tradition that he was a friend of Shakespeare, supported by a statement of John Ward, once vicar of Stratford-on-Avon, that "Shakespear, Drayton and Ben Jonson had a merry meeting, and it seems, drank too hard, for Shakespear died of a feavour there contracted."

I can find only a few copies of anything by Drayton published before 1865, the date of Rider's letter. I don't know how collectible Drayton was in 1865, or how difficult it was to come by his books (they may have been long out of print by 1865), but copies I found, contemporary to Drayton's era, approach four and five figures. The twenty bucks Rider was asking seems like quite a bargain!

Finally, there was Rider's mention of the previous owner of the book in his letter to Mr. Moulton. Specifically, the book was owned by what looks to be J.H. Markland Esq., whom Rider refers to as "the last surviving member of the celebrated Roxburghe Club."

Back to the Internet for Markland and the Roxburghe Club, of which I knew nothing. The Roxburghe Club is the oldest bibliophile society in the world, as the opening paragraph on their Web site states. Quoting that paragraph:

The Roxburghe Club was founded in 1812 and is the oldest society of bibliophiles in the world. Its membership is limited to 40, chosen from among those with distinguished libraries or collections, or with a scholarly interest in books. It has also been distinguished, among the many publishing societies that have done so much in this country for history, letters, antiquity and other branches of literature and art, for the quality of its publications.

Markland appears on the club's members roster as James Heywood Markland, Esq. He does not appear to be a charter member, but is among the earliest, having been inducted by the original 18 members in the club's initial year of 1812. His membership ran through 1845. I wonder what impression his provenance with the book of Drayton's poems made on Mr. Moulton?

Suffice it to say this little letter of bibliographic description has made an impression on me, with its various trails of inquiry into the intriguing world of antiquarian books and their authors, collectors, publishers, and sellers.