Posting it here is an appropriate follow-up to my previous post, which also involved William Holman and books--his and his wife's donation of their private collection of valuable books on the book arts.

The bookmark's content offers a brief teaser for a compelling story awaiting the reader. The red notation was made by Mr. Holman to encourage comments by readers. And I would encourage anyone to read this powerful and engaging memoir and let Mr. Holman know your thoughts. I did and what follows is a modified version of that correspondence. 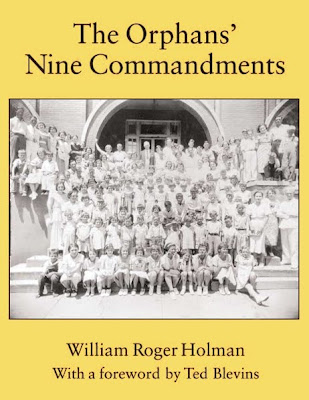 The first chapter of The Orphans' Nine Commandments will knock the wind out of you and lay the foundation for the emotional, gut-wrenching journey a young boy (Holman) is forced to take through orphanages and foster homes during the 1930s and the Great Depression.

As you recover from the shock of what happened to William, who starts out in life as Roger Bechan and is given new names along the way, you'll learn of the human spirit to adapt and survive, even in a little boy stripped of his family, home, and name. This compelling memoir is fraught with cruelty from adults and countered with the resilience and adventure of a young boy growing to manhood, carving out, painstakingly, an existence and new identity for which he seeks meaning and worth and, above all, love and acceptance.

Larry McMurtry calls Holman's book "an important and compelling memoir." Of Holman's struggle and private hell, McMurtry states further that Holman will take his readers along in a way "that will move you, inform you, and haunt you."

This is a horror story as well as a success story. It's repugnant and poignant, humorous and jubilant. Mr. Holman succeeds in taking us lockstep through his darkened childhood with vivid detail against a backdrop of characters, good and evil alike. At times, it reads like a picaresque novel with the pathos and humor of Dickens and Twain.

The reward in the reading is the triumph of the spirit with threads of hope for love and understanding woven into an achievement of family and success, against overwhelming adversity in the formative years.